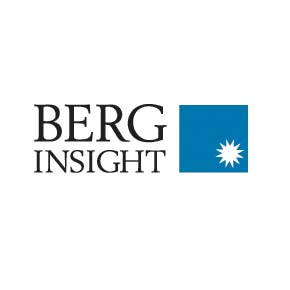 According to a new research report from the analyst firm Berg Insight, shipments of wireless M2M modules for security applications in EU27+2 is forecasted to grow from 2.9 million in 2011 at a compound annual growth rate (CAGR) of 47.1 percent to reach 20.0 million in 2016.

At the same time, the number of tracking devices and wireless alarm systems monitored from an alarm receiving centre and similar will grow from 9.1 million in 2011 to 39.7 million by the end of 2016.

Adoption of cellular connectivity is increasing in the intrusion alarm systems industry.

Berg Insight estimates there will be 4.3 million alarm systems connected to cellular networks in Europe by 2016. Insurance companies encourage the use of dual fixed line and wireless signalling solutions in monitored alarms. By adding a secondary wireless link, communication becomes more reliable and cannot easily be disrupted.

The market for intrusion alarm systems will continue to grow for many years to come. “The penetration of monitored alarm systems has only reached about 3 percent of all businesses and households in Europe”, says André Malm, senior analyst at Berg Insight.

He adds that only about 2 percent of all households in Europe have a monitored alarm system. The economic climate will however have a major effect on near-term growth in major markets such as Spain and the UK as fewer households are willing to make investments.

Nevertheless, recurring revenues from alarm monitoring services for existing clients have proven relatively resilient despite the economic downturn. “Alarm systems are becoming more valuable for customers as the scope of offerings are being expanded to include detection of fire, gas and water leaks, or even home automation functionality” concluded Mr Malm.

Vehicle tracking and recovery remains the largest application area for wireless M2M communication in the security industry, using devices that combine GPS and GSM/GPRS technologies. The main markets in terms of units and value are tracking of passenger cars and commercial vehicles.

In many countries, owners of luxury cars often need to install tracking systems when applying for an insurance policy.

The proposed European eCall initiative imposing that all new cars sold in the EU from 2015 be fitted with an automatic emergency call system is likely to also drive adoption of stolen vehicle tracking services.

In addition, there are many emerging niche markets for tracking systems such as construction equipment, leisure vehicles and boats.