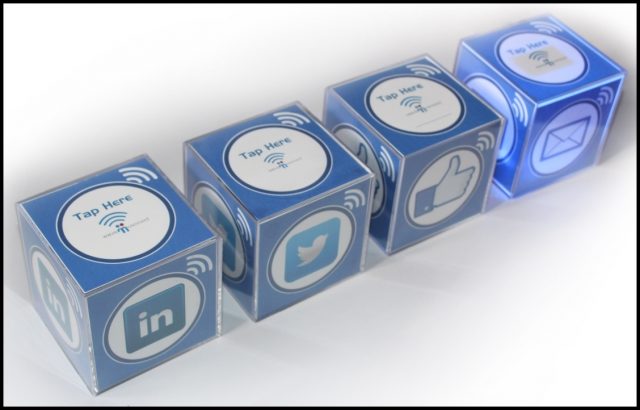 (BLOG): July 4, 2013 — A new study from ABI Research indicates that “… there’s an intriguing intersection developing around social networks and M2M services. At this stage the activity is nascent.”  However, one company, WaveNconnect seems to be ahead of the game, says Bob Emmerson. They have created a solution that has been trialled in real-world scenarios and it’s delivering innovative, versatile functionality.

The basic concept is to combine the power of social media with a web-based M2M application that employs wireless and NFC (Near Field Communications) technology. Here’s how it works in an Expo scenario:

The organiser gives attendees an NFC tag card, which allows them to employ their preferred communications medium, for example, Facebook. Exhibitors rent and activate stations supplied by the vendor and when visitors tap the card on the station a wireless link is established and a message is sent immediately, to the visitor’s Facebook account. The message would identify the product, post a link, product message or simply tell the visitor’s friends that he or she likes it.  The exhibitor will also be informed about the various “likes”, “clicks” and “shares” generated.

Tapping on an email station is a neat service because it removes the need to take literature home. The exhibitor has your email address and everything you want will be waiting for you on your return. However, there may be times when you want to tell friends or colleagues about a particular product or service and you have to configure the card for email. In this case you go to the camera station, which employs an Android tablet.  Stand in front of this station, tap the card and your photo will be taken.  If you like it, it can be posted along with a message that is keyboarded on the tablet.

WaveNconnect generates different, detailed real-time reports about the generated interactions, number of shares, clicks, per country and even per city. For example, a time-based evaluation about the usage of each Connect Station and this can be used to generate additional sales leads and new marketing strategies.

One of the trials was conducted at a relatively small Expo in North Africa and the exhibitor was a major car manufacturer.  The combination of Facebook shares and camera station posts resulted in marketing data being generated in distant locations as well as locally.  The back-office system displays them on a map.  This allowed the car manufacturer to quantify the level of interactions generated by the visitor’s friends and colleagues and assess their interest.  For example, the Expo in North Africa generated additional leads in Ashburn, Virginia.

There’s a lot to like about this solution and the company has indicated that more functionality is in the pipeline.

The author, Bob Emmerson (pictured above), is a freelance writer based in The Netherlands specialising in machine-to-machine communications