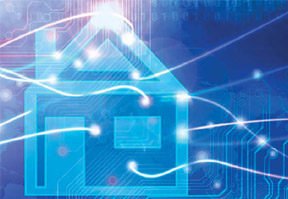 The Internet of Things is set to create a market worth almost US$9 trillion by 2020. According to some analysts*, a large chunk of this business will be generated by smart connected homes. Antony Savvas reports on business developments in the smart home sector.

Analyst firm, IDC* has reported that market enablers – for the rise of IoT – include the ongoing development of smart cities, cars, and houses, as well as a growing culture of personal connectivity. Cloud-based home management systems, that allow users to remotely control household features like lighting and air conditioning, are also primed for rapid growth.

Security, telecoms, and utility firms have already jumped into the cloud-based home management market, seeking to offer new services in addition to their established ones, in an attempt to reduce customer churn and increase the average revenue per user (ARPU). In Europe, the drive towards smart metering in the home for utility services has aided the market, with the likes of British Gas, Essent, Eneco, Nuon, RWE, EnBW, and Eon.

“Imagine using your smartphone or tablet to detect an intruder in your home or to adjust the temperature in your living room, no matter where you are,” said Lisa Arrowsmith, associate director for connectivity, smart homes, and smart cities at IHS. “Cloud-based home management makes all this possible, and much more. With a wide range
of companies offering such solutions, the cloudbased home management system business will expand dramatically in the coming years.”

A consortium of more than 40 UK-based technology companies have recently agreed on a new and open IoT specification that can be used in, amongst others, the home sector. The HyperCat specification aims to allow machines to easily work together over the internet. It also enables applications to be able to discover – and make sense of – data without human intervention.

Over 12 months, and with the help of £6.4 million in funding from the UK’s Technology Strategy Board, development teams from major companies including ARM, BT and IBM worked alongside UK start-ups, local authorities, and university departments to find the solution.

The HyperCat specification is a thin interoperability layer for the IoT, which allows applications to explore what data and resources are available on a specific data hub, or search for particular types of resources across the internet. For example, if an application only understands temperature measurements, HyperCat provides a means to search for and discover only this type of data. This is helpful when data is buried amongst other information that the app in question may not understand.

The Technology Strategy Board created eight clusters to help develop HyperCat, which each created interoperability within their cluster – and then between clusters. Andy Stanford-Clark, master inventor at IBM UK, said: “We’ve been able to create whole new applications very quickly. For instance, we can take illumination data from streetlights belonging to another project cluster
and display it on our own application. Being able to explore the HyperCat metadata in human and machine-readable formats makes it easy to mash-up new applications.”

Another major development comes from Google’s Nest Labs. Nest is a smart thermostat maker that Google bought this year, for US$3.2 billion, to help it carve a niche out of the smart connected home market. The company then created an industry group to encourage the makers of smart home devices to use a networking protocol. It’s called, ‘Thread’ and it enables devices to easily communicate with each other.

LockState’s WiFi-enabled ‘RemoteLock’, via Ayla’s cloud platform, means that property owners can issue permanent or temporary pass codes to family members and guests without worrying about lock boxes, hiding keys, or illegal copying. A security camera, part of the RemoteLock platform, can also monitor and capture activity around the door.

The smart home standards and technology market is clearly becoming a crowded one.

Before any smart connected home technology can get a real market foothold, some obstacles need to be overcome, according to Intellect. The company feels that the connected home is “potentially the next big technology revolution” that “could dramatically change many aspects of our daily lives”. It warned, however, that “there are big issues to be resolved before it becomes a reality.”

Creating a home network is a complex project, says Intellect, and the cost of retrofitting a concealed wiring solution into existing homes “can be “prohibitive”.

Eva-Lotta Lundquist, global account manager at Telenor Connexion AB, said: “It’s always cheaper to find out what data load your components can handle before you hit the market.”

At the Telenor Connexion test lab, all of a system’s components are pushed to their limits: data load, speed, user numbers, hardware and software – the whole ecosystem. Both clients and their subcontractors are invited to the test lab where they can adjust and optimise their part of the system.

It’s been quite a journey in smart home developments to date. Today, the customer now has more control over more functions via their mobile phones. But we’re not done yet.

“We’ll see more changes in the next five years than we have in the last 50,” said Dan Hovang, CTO at Verisure.