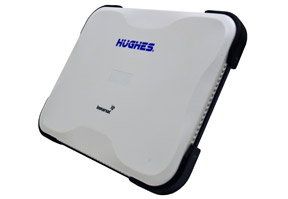 Hughes Network Systems, LLC, the global in broadband satellite networks and services, has announced that its newest generation portable BGAN terminal, the Hughes 9211-HDR, is on target for commercial availability in November 2014. It is designed to operate with Inmarsat’s BGAN HDR service, which provides a portfolio of asymmetric and symmetric high data streaming rates. The BGAN HDR service provides an average speed of 650 kbps with speeds as high as 800 kbps often being achieved.

The Hughes 9211-HDR builds on the success of the popular Hughes 9201, which has a significant global installed base of customers. Hughes proudly remains the only approved North American BGAN terminal manufacturer. Designed to provide high performance mobile satellite connectivity, even in the most demanding environments, the Hughes 9211-HDR is the world’s smallest and lightest Inmarsat BGAN HDR-capable terminal. “Hughes transformed satellite newsgathering in 2006 with the Emmy-award-winning Hughes 9201 BGAN terminal,” said Graham Avis, vice president and general manager of Hughes San Diego. “With the introduction of the 9211-HDR, we are building on that legacy with a terminal that is faster, smaller, lighter, and far more feature-rich than its predecessor. We are delighted to announce this exciting addition to our constantly expanding portfolio of BGAN terminals.”

“Many journalists know and love the Hughes 9201 and the 9211-HDR is a worthy successor,” said Martin Turner, director, Inmarsat Media. “Its size and weight make it ideal for getting to where the story is happening and for taking advantage of the speeds—and the video quality—that BGAN HDR enables.”