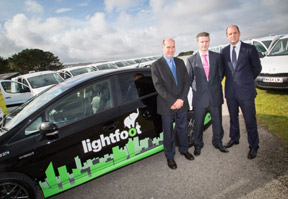 Lightfoot® has been installed in 54 new Peugeot Partner vans following a successful trial which commenced in January this year and proved fuel savings of over 15%.

For an initial four-week ‘blind’ trial, Lightfoot’s in-cab display and audible commands were switched off so that an accurate picture could be built up of baseline driving behaviour across the fleet. Then, a further eight-week live trial followed when the Lightfoot® units were remotely activated, indicating to the drivers when they needed to modify their driving style in order to optimise fuel efficiency with safer driving. A final two-week ‘blind’ trial where the prompts were deactivated was then undertaken to assess further changes in driver behaviour.

Commenting for South West Water, transport manager Mark Karkeek said:  “We’ve been most impressed with the results from the trial, hence our decision to install Lightfoot® across our fleet of ‘leak detection’ vehicles for the next five years. As a business, we are keen to pioneer new technologies and I believe that South West Water’s investment in Lightfoot® is a leading move within our industry.”

Mark continued: “From my perspective, there’s little management intervention required to use Lightfoot® and feedback from our drivers is very positive; it’s very easy to use and Lightfoot’s installation appears to have introduced healthy competition within the team.”

Commenting for Lightfoot, sales director, Martin Kadhim said: “South West Water operates over a large geographical area so being as efficient as possible is paramount. Lightfoot’s introduction to the fleet will drive down fuel consumption and contribute to reduced accidents and improved vehicle maintenance. Furthermore, it feels great to work with a fleet that is less than two miles from our Head Office.”

South West Water is optimistic that the initial Lightfoot® trial results will be sustained and, subject to confirmed fuel savings being achieved across the first 54 vehicles, it anticipates pushing the technology further into its operational fleet which consists of a further 700 vehicles.

As networks transform, new devices come to market and data is ingested from new sources, Robin Duke-Woolley, the chief executive of Beecham Research, interviews Charlene Marini, the vice president and general manager of devices in the IoT Platform business unit at Arm. Deriving the full value and benefit of trillions of IoT devices will require