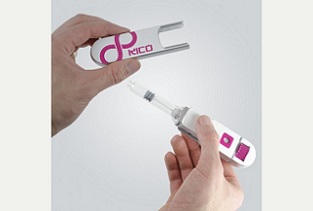 With apparently perfect timing – one day after Apple launched its very own watch to an expectant world – this year’s Wearable Technology Show kicked off at the Excel Centre in London’s Docklands. Alun Lewis reports.

Considering that it’s only the second year the show has run, it’s clear that it is already gathering a sizable momentum, pulling in exhibitors, speakers and attendees from many different sectors. This is hardly surprising when market analysts like Juniper Research suggest that global retail revenues from smart wearable devices will reach US$53.2 billion by 2019, compared to the $4.5 billion total for 2014.

With around 170 speakers crammed into the schedule for this two-day event, and discussion streams covering topics as diverse as smart fabrics and textiles, managing innovation and start-ups, medical, sport and fitness, connected living, and enterprise and M2M applications, it was clear that the show was for the nimble-minded and physically fit. This theme was also reflected by the number of well-known sports people who some exhibitors chose to front their stands, such as UK Olympic athlete Jo Pavey (below) who was there for Intel.

A more than sporting chance to win acclaim

The competitive spirit was also reflected in the Wearables Awards, sponsored by IBM and judged by a team of industry experts. Withings a creator of smart health devices, won twice: Best Consumer Product and Overall Wearable Winner. Medical technology company Hocoma won in the Best App category, was a runner up for Best Medical Wearable and came third in the battle for Overall Wearable Winner.

Best Innovation Award was presented to Cambridge Consultants who were also exhibiting Solitair, a wearable sensor and smartphone app that tracked exposure and potential damage from ultraviolet (UV) rays, and their KiCoPen, a smart self-powered injection pen system. Again linked to an app, it allows diabetics and other people reliant on medication to track their treatment.

Chips – that keep their users off the French Fries

Given the implicit need for wearable devices to be tough, often unobtrusive, secure and to operate for as long as possible without charging, it probably wasn’t surprising to find that a number of chip, circuit board and connectivity technology, and sensor vendors were present at the show.

Companies like Samsung Semiconductors, Intel, Silicon Labs and LM Technologies focused on combining multiple functions onto single chips, emphasising how closely silicon design now needs to be integrated much more tightly than ever before into overall systems.

More specifically on the sensor side of things where, after all, developments are going to be crucial in creating new business models and revenue streams, it already looks like we’re starting to get closer to building our very own working versions of the Star Trek tricorder. Significant here were Hamamatsu, photonic chip specialists, showing products like their ultra-compact MEMS-based (Micro-Electro-Mechanical Systems) micro-spectrometer.

Flexible people – and their ‘smart’ and stretchy clothing – will also often require flexible circuitry and UK company Stretchable Circuits Ltd was also exhibiting at the event, showing how circuitry can be printed directly onto plastics to fit into clothing and bend and flex with its wearers.

Taking research into the next stage on from MEMS to the borders of nanotechnology – amongst other interesting things – was a team from Queen Mary College at the University of London who are focused specifically on researching wearables. One project on display showed how millimetre wave and TeraHerz radio could be used to develop new sensor, diagnostic and communications in healthcare monitoring.

If the concept of a healthy mind in a healthy body was an Ancient Greek and Roman ideal (philosopher Thales and poet Juvenal), there were a number of companies at the show who were also focusing on mental wellness, aiming to reduce stress in our increasingly attention-deficit disorder-plagued world. To a large extent, these seemed essentially a replay of initiatives that were first tried out in the 1970s using what was known then as biofeedback. Technology, however, moves inevitably on and companies like Muse are now able to exploit both more powerful brain activity sensing systems and the power of smartphone apps to carry out the necessary signal analysis and provide the visual or auditory feedback to the user, based on gamification principles.

Following on this theme, one of the speakers at the event, Gawain Morrison is the co-founder of biometric wearable start-up Sensum. Sensum develops biometric wearable technology able to combine neurological data from wearable devices which monitor eye-tracking, Galvanic Skin Response and facial recognition, link this to geo-tagged and time-stamped annotations of what happened and when. With this data, retailers, hospitals or brands could then identify the way people look, feel and engage at each point of their journey, adjusting shop floor designs, hospital care, website interfaces and advertising campaigns to achieve the positive emotional response they desire.

Forget the Internet of Things – it’s obvious that we’re now moving to an ‘Internet of the Senses’ if wearables continue on their present course.

The author is Alun Lewis, editor of M2M Now magazine