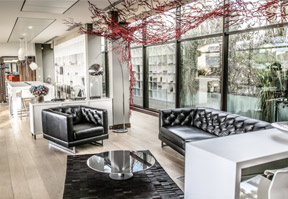 Huawei has opened its first global research centre focused on innovation in aesthetics and design, part of the $600 million investment plan in France in the coming 5 years.

The Paris Aesthetics Research Centre will bring creative ideas in colour and style to Huawei products, integrating innovative technologies with aesthetics The Centre has already contributed to the design of Huawei’s second-generation fitness band, the TalkBand B2, just released in Mobile World Congress.

Welcoming distinguished guests at the opening ceremony, Huawei CEO Ken Hu said, “Paris is a global hub for fashion and arts, and now the city’s creative resources can be applied to Huawei products worldwide. That makes France a vital part of our global innovation.”

Mr. Lehanneur said, “We are at a turning point in history. Technology is no longer simply around us – it is with us, and, in the case of wearables, on us. The challenge now is to give it shape.”

Huawei is expanding its collaboration with the French design community, having recently signed a partnership with the École Nationale Supérieure de Création Industrielle (ENSCI), a design school in Paris.

“We welcome and appreciate the long-term investments and economic contribution Huawei is making in France. Huawei’s selection of Paris as the site of its global Aesthetics Research Centre is another proof that Paris is becoming one of the most important cities globally when it comes to design and technology, ” said Jean-Louis Missika, mayor of Paris.

A major player in the information communications and technology (ICT) field, Huawei has had operations in France since 2003 investor from China.