Home › IoT News › Automotive › Will IoT destroy capitalism, what happens to all that blood and will we soon be robots? 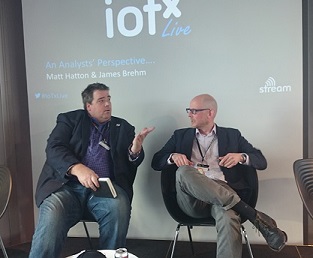 Matt Hatton: I came up with three topics to discuss on the train here. Well, three words really. Topic One is Disruption (we never heard the other two topics, Ed.). My premise is that IoT (the Internet of Things) will disrupt and possibly destroy the Capitalist system as we know it! (Gasps and laughter from the audience.)

MH: I’ll elaborate. There’s built in redundancy in most things. IoT means a shift in ownership and buying. BMW makes money out of the 90% of time your car’s on the drive. Hardware as a Service will need to be ruggedised, as jets are – nobody expects a jet to last only five years!

James Brehm: You mean changes from CapEx to OpEx. Someone spoke earlier about the three options for an IoT business; hardware deployers will make money, save money or stay out of jail – compliance.

Several years ago, a company I was at did a survey of Kindle users, asking them how they thought it works. 54% said Magic. (Laughter.) 18% said ‘The books were already on there, we’re just finding them.’ And 6% said WiFi.

JB: It can be make money and save money at the same time. The ‘stickiness’ (of applications) will be there.

LL: Are there any examples?

MH: Zipcar, you know Cars as a Service. What should car manufacturers do about it? Fight it? Embrace it? And there’s DriveNow from BMW; it’s small now but what happens when it grows? Will the chairman of BMW want to develop it?

JB: And Verizon Vehicle is launching next week.

Julie Williams, B+B SmartWorx (from the floor): What happens when vehicles are autonomous?

LL: She likes all the scary stuff.

JB: When’s that? The example at CES (Audi showed an autonomous car in Las Vegas in January) was just one autonomous car. ‘Autonomous’ will be the 5th Industrial Revolution. But who cares? By then we’ll all be robots. (Laughter.)

MH: Air BnB is another one. Homes as a Service. IoT applications like Nest will enable these services.

LL: How are connections going to grow in scale?

MH: It won’t be billions (of connections) in cellular. Well, maybe two billion. It’ll be multiple technologies, that’s what we like about Stream. You need to bake it into your platforms, multiple technologies. Quick, say something nasty about them, this is getting awkward. (Audience laughter.)

JB: How many devices now have the ability to be smart but lack connection? They don’t have a gateway and are not being managed. It’s not just a cellular / satellite world. It’s cellular, satellite, low power, and mostly wired. It’s also about the power of the ecosystem.

Richard Stamvik (of ARM, from the floor): We have all these deployments and have cellular operators today struggling with the IoT. At the same time we have smart cities emerging. Will we see the emergence of new smart city operators?

JB: To be determined. Cellular operators feel it slipping away. They ask should we deploy and manage some stuff, or offer private networks? In Texas, where I live, two operators have sold spectrum to oil companies to run their own networks, which they do very successfully. Now the operators need the spectrum for LTE and they may have to buy the oil companies to get their spectrum back! (Laughter.)

JB: Business Process Management (BPM) has been left out of IoT. Wot.io are managing big data, but it’s about contextualising the data.

MH: The only people able to do this are SIs. Someone on LinkedIn the other day asked why SIs are so interested in IoT. Er, … because there are a lot of systems to integrate?

Question from the floor: What’s your advice to companies exploring a way into IoT?

MH: Convince the CEO, it’s the only way. It has to be driven from the top, unless it’s a small project.

JB: People need to ask what is IoT? Where are there examples? When should I do it? Who should I talk to? How do I do it?

JB: Yeah, ‘My name is James and I’m addicted to IoT’.
A chief IoT officer is needed to make this work. And a chief data officer, that what this is about.
I’m working with a billion dollar company making blood bags. They want to connect 10,000 of their machines next year and then connect all the blood bags.

MH: Blood as a Service! But is that an enhancement of an existing service?

MH: Can I just clarify that I’m not accusing the Chinese of using our blood to make black pudding. (More laughter.)

Jeremy Cowan, M2M Now: Something’s been puzzling us at M2M Now. There was a lot of public relations hype before Mobile World Congress in Barcelona this year around security for M2M and IoT. But when we raised the topic at the event most software vendors and system integrators just shrugged their shoulders and seemed unwilling or unable to discuss it further. What are your security concerns now? Is it being well managed?

MH: Security is very important. That may seem trite and not very helpful. I’m not a security guy, but it’s about acting appropriately. For example, information on where buses are is published openly, but the security of medical records is vital. There’s more on this coming from us (Machina Research) soon.

JB: That data has some value to someone. Even about buses. The value of data is in the eye of the beholder. I was at my gym and I noticed that they had the Admin password posted up on a sticky note. I asked if I could have a look at the system and from there I could access the HVAC (heating, ventilation, & air-conditioning), lighting and door locks.

Question from the floor: So is security about a constant case of incrementally keeping up with changes?

MH: Well, we’ve seen cock-ups in M2M deployments. In Oslo, all smart meters went offline and when they all came back on at once they all started reporting their status at the same time, knocking out base stations. Or in South Africa, traffic light SIMs were being stolen and put into dongles. Maybe IoT needs more White Hat Hackers.

JB: Most hacks don’t happen maliciously. Security will happen through consolidation of IoT, but it’ll never be completely secure when it’s on an open network.

MH: Sometimes there’s more value in a service than just the dollar value.

MH: Or personal data. If it’s disclosed you can’t just say sorry and give it back.

Nigel Chadwick, Stream: What’s the most disruptive thing in IoT at the moment?

MH: I started with the destruction of capitalism. Is that not disruptive enough for you? (Laughter).

The IoTx-Live event (April 30, 2015) was organised by Stream Technologies and held in London, UK.