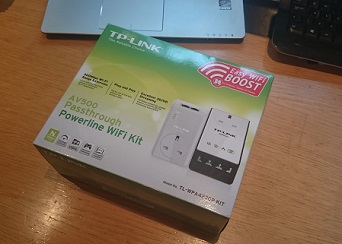 The TP-LINK works out of the box

PRODUCT REVIEW: If you have high ‘net dependency proto-adults (let’s call them teenagers) at home you may recognise this conversation, says Jeremy Cowan. It starts with an expression close to bereavement.
“I thought we were supposed to have Superfast Broadband. (Fixes Bill Payer with accusing look.) There’s no signal at all in my room. #WTF.”

Then all three teenagers turn towards yours truly.  Clearly, I have failed as Chief Provider to drag home the 21st Century’s slain carcass. And don’t I write about this stuff? It’s a well-known fact that all their friends have better broadband.

Depending on the urgency of the web ‘fix’, this may lead to a protruding lower lip that reaches worrying proportions around the age of 15. Or it can herald the End of Time, if it’s temporarily impossible to share every Instagram OMG, Whatsapp goss or FB party invite, and all at blazing speeds.

Here I think it’s only fair to point out that, in exchange for living in one of the most attractive rural parts of an unfeasibly beautiful country, we pay the price in poor connectivity. Actually, that’s not fair, until last year it wasn’t poor it was flippin’ woeful. There’s no cable within five miles of here, although a Virgin Media van was once seen on the bypass. Turns out it was lost, but that says more about Virgin Media.

Vodafone is the best of a bad lot among UK mobile service providers, some of whom couldn’t find Hampshire on a map. I gave up on my iPhone when I realised that it did lots of amazing things but making calls in this neck of the woods was not foreseeably going to be one of them (a quick paean of praise for the Sony Experia Z1, here — but I digress).

So, we’re reliant on old-school broadband. Copper to the exchange. Twisted pairs. Or we were, until a few months ago.

For all their intuitive grasp of devices, my ‘yoof’ have little understanding of (and even less interest in) the trials of coaxing UK network coverage into rural Britain. We may be little more than an hour from central London but the local exchange was only upgraded by BT Openreach in the last six months to ‘Superfast Broadband’.

At this point, readers in Asia, North America and … well, just about everywhere will fall about laughing when I say that we were thrilled to leap from 4Mbps download to 25Mbps overnight.

Everyone was satisfied until we noticed how patchy and variable the service is around the home. Upstairs was more buffering than Buffy. Call of Duty became Call me if it Works. Most of the ground floor rooms were well served — except for one, ironically the Steering Committee’s study. Fortunately, the WiFi footprint from my Home Office extends to her Study and she has never grumbled.

Of course, I went into a spiel about the effect of thick load-bearing walls, and reinforced steel joists. Then when they woke up I told them about the impact of water tanks and today’s metal-faced insulation panels. By this time I was even boring myself.

So, when I was called by the PR company handling TP-LINK’s AV500 Passthrough Powerline WiFi Kit offering me a device to try, it seemed the obvious next step. George Malim, the esteemed editor of our sister title, VanillaPlus.com, has been using a similar system for years to extend the WiFi signal through his home’s power circuit. But on the basis that every installation is different and my ear-bashing was becoming a clinical risk I asked for a kit to be sent.

Long story shorter, it works out of the box. The kit is plug-and-play, the Sky broadband signal to the house extends the WiFi service from end to end of the ground floor, and by positioning the range extender at the top of two flights of stairs in our converted loft, we can now obtain a WiFi signal where before the message was ‘No Server Found’.

Measurements around the house are as follows: