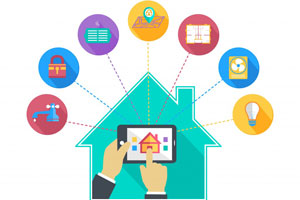 We’ve all seen films and TV shows where a guy walks into a pub or cafe, nods to the waitress, and says, “the usual please” and the waitress knows exactly what he means.Without another word, they disappear before returning a few minutes later, with the exact thing he wanted, just as usual.

This is the kind of system I would like my house to have, but I’m not talking about a waitress. When I walk into a room, I want the room to know it’s me and give me ‘the usual’ – my favourite combination of lights, my ideal room temperature, maybe my top playlist – you get the idea.

Luckily for me – and for others, wireless technologies are at a point where this is possible. Without having to flip a switch, push a button, or turn a knob, my surroundings can know it’s me and can automatically create the environment I like best. The concept involves low-energy proximity sensing, which is a technique now supported by two widely used wireless protocols, Bluetooth Low Energy (BLE) and ZigBee.

How does it work?

A beaconing device, which can be built into a smartphone, wristband, or some other kind of wearable, is a vital cog in the smart home machine. It sends out a low-energy signal at regular intervals, in much the same way that a lighthouse or navigational system does. The beaconing signal contains a unique user ID (UUID), and when I enter a room, the room’s network receiver picks up the signal and reads the UUID. The UUID is associated with settings – light levels, thermostat temperature, and so on – each configured to my liking, and the network automatically uses those settings.

Beaconing though, shouldn’t be confused with GPS. A GPS device can only find my location coordinates and not much more than that. But a beaconing system provides identification along with the location. It says, “It’s me, Roman, and I’m here.”

Beaconing can be used with a wide range of home-automation tasks. For example, the front door can unlock as I approach, and the alarm system can turn off as soon as I enter. No more fussing with keys or having to remember a code for the alarm. Also, if my daughter breaks up with her boyfriend, there’s no need to change the locks, as access is electronically limited, immediately, at the press of a button.

Beaconing can save on utility bills, too, since anything that uses energy – lights, ceiling fan, gas fireplace, even Christmas decorations – can turn off automatically when I leave the room.

Added to this, if we throw sensor technology in the mix, then settings can actually change as my situation changes. Let’s say I just went for a run – I’m hot, and I don’t want the room to be as warm. The network can sense this, and lower the thermostat until my body temperature returns to normal. The same is true if I’ve been sitting for a while: the network can sense my body temperature is lower, and turn up the heat a few degrees to compensate.

Beaconing promises to deliver on my vision of a truly automated home. After all, I want to be warm, without bothering with the thermostat, and I want my lighting to be just right, with my preferred colour settings and illumination levels, without fumbling with switches. In other words, I want to be the guy who gets the usual, simple as that.

Roman Budek, Product Marketing – Smart Home and Energy, NXP, has been working with wireless technologies for more than 10 years. At NXP, he looks at ways of using wireless to enhance smart energy, consumer, and lighting applications. He has a BSEE from the University of Illinois at Urbana-Champaign.