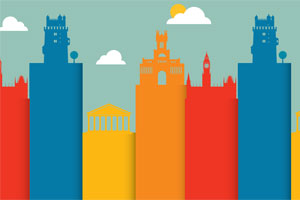 A personal perspective from Dr Rick Robinson, currently IT Director for Smart Data and Technology for Amey, one of the UK’s largest engineering and infrastructure services companies. Previously, Dr Robinson was IBM UK’s executive architect for Smarter Cities.

For the last five years or so, I’ve been using my personal blog – www.theurbantechnologist.com – to explore what a ‘Smart City’ really is. The theme that’s dominated my thinking is the need to synthesise all the very different – and often conflicting – human, urban, commercial and technological perspectives on cities that currently exist.

If we’re to do this, we must reclaim the ‘Smart’ concept from the technology world, returning it instead to its original and more human-centric meaning: the ability for people to have more control over their lives, work and communities through the intelligent use of internet-based communications and applications. Are Smart City initiatives currently being driven largely by technology – or by a real desire to create a better future?

If one truth does emerge from these debates, it’s clearly that anything termed ‘Smart’ must involve a subtle harmonisation of both these forces and, more specifically, break free from the futile and unsophisticated arguments that rage on about whether Smart Cities should be created by ‘topdown’ or ‘bottom-up’ approaches.

Taken in isolation, technology itself is amoral – and frequently banal in its results. On the other hand, desiring a better future without a practical strategy to achieve it is futile. Surely, using the phenomenally powerful technologies only recently available to us to make the world a better place, rather than just making money, is an idea worthy of the label ‘Smart’?

Technology’s not Smart unless it’s used to create human value
It was in a workshop with social scientists at the University of Durham that I first became aware that ‘Smart’ concepts originated in social science in the 1990s, pre-dating the famous early largescale technology infrastructure projects in planned cities like Masdar in Abu Dhabi and Songdo in South Korea. Originally coined to describe the potential for new forms of governance, citizen engagement, collective intelligence and stakeholder collaboration that could be enabled by internet technologies, it was hoped that these emerging relationships could better deliver the outcomes we all want – personal and social health, happiness and fulfilment.

It’s no surprise that technology companies such as Cisco, Siemens and my former employer IBM came to similar realisations about the potential of digital technology to address social as well as business challenges – so what’s the problem?

Large technology corporations are often criticised for their size, profitability and ‘top-down’ approaches – and local authorities are often criticised too. The key question we should be asking is more subtle and more important: what happens to the social elements of an idea once it becomes apparent to businesses of any size that they can make money by selling the technologies that enable it?

The scientists, engineers and creatives who are engaged in Smart Cities initiatives are almost universally extremely bright, well intentioned and humane, and talk with passion about the social and environmental value of their work. ‘Top-down’ is at best a gross simplification of the projects that they carry out, and at worst a gross misrepresentation. Their views dominated the early years of the Smart Cities market as it developed.

However, as the market has matured and grown, the focus on research, exploration and development has switched to the marketing and selling of products and services. With the need to promote those offerings to potential customers, it’s all too easy for the social, economic, and environmental issues to become submerged.

A technology company once asserted that Smart Cities would create ‘autonomous, intelligently functioning IT systems that will have perfect knowledge of users’ habits’ – blissfully ignoring the fact that such perfection is scientifically and philosophically impossible, not to mention inhuman and undesirable. Unless we reclaim the word ‘Smart’ to emphasise human outcomes, the market will inevitably drive energy and resources towards narrower financial interests. Financial efficiency and resilience are not the same as health, happiness and opportunity for every citizen.

Can responsible business create a better world?
Some corporate behaviours promote these positive, human outcomes and are in turn driven by the voting and buying powers of citizens and consumers. Working for Amey, for example, my customers are usually government organisations who serve an electorate; or private sector companies who are regulated by government bodies. In both cases, there is a direct chain of influence leading from individual citizen needs and perceptions through to how we operate. If we don’t engage with, respect and meet those needs and expectations, we will not be successfu0.l

But, in general, business investors are still strongly focused on financial performance, rewarding businesses that make the most money. As a consequence, many social enterprises have difficulty scaling up and many ‘sharing economy’ businesses have nothing at all to do with sharing value and resources, but are really profit-seeking transaction brokers.

Policy, legislation and regulation
One highly relevant quote here comes from Jane Jacobs, the influential writer and urban activist: ‘private investment shapes cities, but social ideas – and laws – shape private investment’. It’s therefore a source of frustration to me that much activity in the Smart Cities community overlooks that fundamental principle.

Milton Keynes for example is a UK city that has many interesting Smart City projects underway, and is often cited as an exemplar for other cities to follow. But its initiatives are funded by central government departments, research or innovation bodies, and the research departments of technology companies, not by re-usable business cases.

By contrast, policy, legislation and regulation are far more effective tools for enabling widespread change, and are what we should instead be focusing our energy and attention on.

The recent Social Value Act in the UK requires that public authorities – who collectively spend nearly £200 billion (€282 billion) annually on private sector goods and services – procure those services in a way that creates social value, such as requiring that service providers engage local small businesses in their supply chains.

Given that companies are already themselves investing in digital technology on the basis of the efficiencies it creates, surely local authorities should fulfil their Social Value Act obligations by using procurement criteria to ensure that those companies employ those digital tools in a way that creates social and environmental improvements?

Similarly, if planning and development frameworks oblige property developers to describe and quantify the social value that will be created by their developments and how they will use technology do so – as the British Standards Institute has recently recommended – then the enormous level of private sector investment in this sector can also deliver technologies for public benefit.

This strategy is exemplified by the London Olympic Legacy Development Corporation as part of the wider Smart London plan. They’re securing private sector investment to deploy technology not only to redevelop the Olympic park using smart infrastructure, but also to ensure that investment benefits the existing communities and businesses in neighbouring areas.

A Smart manifesto for human outcomes – enabled by technology
These business models, policy measures and procurement approaches are bold and difficult measures to enact. They’re not as sexy as self-driving cars, but they’re much more important in achieving positive human outcomes.

Citizen understanding is going to be critical if businesses, local governments and national governments are to adopt them. If definitions of smart people, places, communities, businesses and governments make sense to everyone who votes, works, stands for election, runs for business or buys things – and include the objective of using modern technologies to make the world a healthier, happier, fairer, more sustainable place for everyone – then these ideas have a chance of both working and being worthwhile.

I’m not sure that’s a perfect definition; but I think it’s a good start!