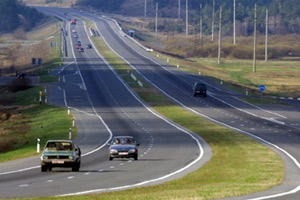 Kapsch TrafficCom AG (ISIN AT000KAPSCH9), listed on the Vienna Stock Exchange in the prime market segment, has been commissioned with the expansion of the toll road network in Belarus. An additional 323 kilometers shall be made available to the BelToll electronic toll system in Belarus within the next ten months.

This expansion is in line with the long-term infrastructure development program of the government in Belarus, and Kapsch acts as both developer and operator of the toll collection system in the region.

Many recently upgraded and reconstructed roads throughout the whole country shall be affected by the BelToll extension, including parts of roads P99, P23 and P21 as well as parts of the highways M5 and M6. After completion of the planned extension, the whole length of the toll road network will exceed 1,500 kilometers – almost twice the length of the road network in summer 2013.

“From day one we have set up a toll system in Belarus in accordance with international standards and using latest modern technologies”, explains Michael Gschnitzer, Vice President of International Sales at Kapsch TrafficCom. “Taking into account the geographical location of the Republic of Belarus, transit toll collection is an important technical and administrative solution, which contributes to the infrastructure development of this country.” The system is based on short-range communication between vehicles and infrastructure and allows efficient toll collection in freely flowing traffic. Almost all vehicles are tolled by the Kapsch system besides passenger cars with a maximum laden weight not exceeding 3.5 tons, which are registered in countries of the Eurasian Economic Union.

The electronic system BelToll has been in commercial operation since August 1, 2013 and has been gradually expanding from 815 to 1,512 kilometers Since its opening, more than 220,000 vehicles have been registered for the system (as of July 2015) being controlled by more than 90 automatic stations. The BelToll project with Kapsch is contracted for 20 years of operation.