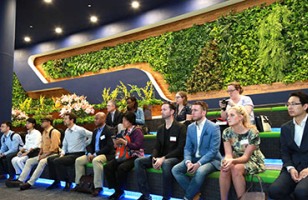 Ten UK companies recently visited Malaysia and Singapore as part of the Connected Cities Trade Mission, organised by Innovate UK and UK Trade and Investment (UKTI). In this, the first of a 3-part report, IoT Now gets their views on smart cities in the region.

For many SMEs (small to medium-sized enterprises) it simply isn’t possible without support and one consequence of this is that market opportunities get missed. In the UK, we have some brilliant connected cities SMEs, many of whom have benefited from Innovate UK investment so we know them and the potential they have to become world beaters.”

Sonny Masero, chairman of Demand Logic had specific goals in attending: to develop a partnership with VADS Lyfe, a smart city subsidiary of Telekom Malaysia; to establish its first pilot customers in this fast-growing region; and to evaluate the ASEAN market for Demand Logic’s commercial building IoT service.

“We were also mentioned as the ‘Fitbit for buildings’ live on air on Channel News Asia which reaches billions of people in the region. Like any mission you have to be prepared to take the initiative and organise additional meetings around the core activities otherwise the opportunities presented are much more speculative,” Masero added.

According to Tim Pryce, head of Public Sector: “Carbon Trust is looking to … accelerate the move to a sustainable, low carbon economy to tackle the threat of climate change in a way that also encourages prosperity. SE Asia is a key focus area for us as a fast growing part of the world with an incredible pace of change. Emissions will continue to grow rapidly unless development pathways change – there is a huge opportunity to shape that development in a more sustainable way.

The Carbon Trust has 15 years of experience in working with large corporates, public bodies, governments and cities on climate change mitigation, and we have a lot of expertise, tools, policy and programmatic knowledge to share with SE Asian countries who are just beginning to grapple with the challenge of reducing emissions after the pledges made in Paris in 2015.”

Nic Shulman, founder & CEO, told us his company, BlockDox has had a presence in Hong Kong since September 2015. “We have learned a lot about the benefits of BlockDox for the Asian market and were encouraged to visit Singapore by our network there. The trade mission offered us a fantastic opportunity for a soft landing and act as a catalyst for our goals which were to meet with prospective customers, partners and investors.”

The founder & CEO of Design for Social Change (D4SC), Priya Prakash, said that they differed from other companies on the mission as they don’t offer a pre-defined smart cities technology solution. “Instead, we offer a platform that allows people to identify and prioritise solutions. As a consequence, we had no pre-existing expectations of the mission, other than to gain insight into how good a fit the idea of harnessing insight from citizens would be in the South East Asian market.

So, did Singapore and Malaysia’s Connected City needs match expectations? IoT Now asked. If not, how did they differ?

Richard Howells, CEO of Bronze Labs, said: “It was apparent Malaysia was going through a period of very high growth based on an extremely ambitious construction plans powered by international investment. With huge amounts of space Malaysia formed a contrast to Singapore which was making use of land reclamation techniques and building recycling to continue growth within a limited geographic area.”

Carbon Trust’s Tim Pryce commented: “Singapore is further advanced, and has sophisticated urban modelling and mapping tools covering topics such as energy demand and supply, climate risk, transportation demand and air quality. However, it was clear that many aspects of building operational management, for example control of lighting and cooling systems, could be improved, and there is considerable further potential for modal shift from cars to public transport – particularly valuable in a land scarce city state like Singapore.

“Malaysian cities vary hugely over short distances, with some districts boasting district cooling and relatively good building management systems, and others with very few low carbon energy demand or energy supply measures in place. The importance of building orientation is patchily understood – at that latitude building orientation has a strong effect on solar gain as north and south facing windows gain almost no heat from the sun while east and west facing windows and buildings have huge solar gain and therefore much higher air conditioning requirements and energy use.”

BlockDox’s Nic Shulman agreed. Yes, Singapore is far more organised and advanced in its approach and current deployment of smart city technologies, he said. Malaysia is still in a stage of aspiration. Forest City, in particular, is an example of their ambition.

“Singapore and Malaysia have cultures, governance models and user/people needs that in some ways, couldn’t be more different,” said Priya Prakash of D4SC. This is what makes the ASEAN region so fascinating – and provides companies like D4SC with opportunities to trial bespoke, country-specific solutions across the region. For us, the mission was more about listening, learning and forging relationships with potential partners. We were keen to understand the needs, wants and desires of people living in these urban environments – along with the ‘pain-points’ in their daily interactions with the city’s infrastructure and services.”

Similarly, Prakash continued, listening to local city authorities, technology service providers and governments, and understanding the challenges they face in running and developing increasingly complex, fast growing cities was eye-opening and provided D4SC with a valuable insight into how its platform can help to provide the insight into citizen needs that is so critical when smart city solutions – or virtually any other citizen-focused projects – are being devised.

In Malaysia, while the theme of technology solutions looking for markets (or waiting for them to mature) was a common one, D4SC also saw encouraging examples of solutions developed as a result of Malaysia’s developing smart cities ambitions.

“What was common to all the projects we saw during the mission, however, was the need to engage with citizens – either in order to gain insight into people’s needs, or in order to validate the effectiveness of the solutions developed – an exciting opportunity for D4SC and our ‘people first’ platforms helping humanise many of these large scale smart city developments.”

By contrast, Singapore is the gateway to the ASEAN market and is, according to Prakash, the best test-bed/living lab for what future smart cities and nations aspire to be. As well as being a key international financial centre, in recent decades, Singapore has – largely out of necessity, developed several world-leading planning and management solutions for cities.

“As a consequence, Singapore is not just the most attractive place for entrepreneurs and VCs to look for cutting edge urban innovations, but perhaps the best place for companies working in this space to find a home for their innovations.,” he said. “Our participation in the mission has already helped us to achieve a step-change in our international expansion and business development activity. In fact, now, a month since the trade mission, doors continue to open for us across Government and business in the region, with us in discussion with a number of private and public sector potential partners.”