Home › Blogs › What do IoT device & system developers need to know about the Smart Home as a Service? 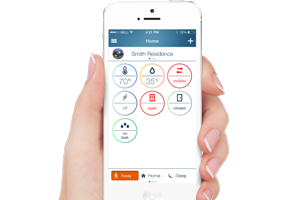 In the Smart Home as a Service, end users want to be ableto monitor and manage all their smart services and devicesfrom a single smart phone app interfaceOne page, one dashboard that does it all

A recent Comcast report, compiled from almost 1,300 US consumers, explained that what consumers really want in the IoT connected smart home is services – Smart Home as a Service (AKA SHaaS) – not a bunch of connected devices that remotely control various widgets and devices in the home.

There are three big differences between an IoT connected device and a Smart Home as a Service device.

The SHaaS device must be able to connect to and communicate with other smart or connected devices in the home. Unlike the typical web connected appliance being marketed today, it is not enough for the device to just be able to managed over the internet.

A real Smart Home as a Service device or appliance has to be able to talk to all the other connected appliances. For example, the security system should be able to exchange data and commands with the home’s environmental controls (i.e. heating and air conditioning), leak detection, lighting, entertainment, lifestyle, etc, says Cees Links, GM of Qorvo Low Power Wireless Formerly CEO and founder of GreenPeak Technologies.

For example, in a home, if the system senses that the stove was left on after everyone has left, the system can recognise the danger and turn off the stove. Or if a leak sensor detects water dripping from the water heater, not only does it send out an alert, it also turns off the water and gas/electric supply, avoiding a mess and saving money.

Finally – Instead of each device having its own custom IoT app or control panel, all the home’s smart services need to be managed from a single dashboard on a smart phone or any other web connected device. End users do not want to shuffle through a screen full of various apps in order to find out what is happening in their home.

How does a SHaaS application actually work?

There are a wide range of different types of SHaaS applications. The most common are security, lighting and environmental (heating and air conditioning). However, one very interesting application for IoT developers is known as “family lifestyle monitoring”

GreenPeak (now part of Qorvo®) recently announced the Family@Home system that enables residents, parents and caregivers to monitor what is happening in the house. By using a series of position and/or motion sensors (a minimum of four) mounted in the areas of the home that usually get the most foot traffic, it can sense who is moving around and when. However, it does a lot more. Because of its cloud intelligence, it is a smart system that can learn what is normal for the household and then can take action if something out of the expected occurs, like the kids cutting school and coming home to have a party when the parents are not around.

For families with seniors who want to live independently, this kind of SHaaS system can be a godsend. It can track the daily motions of the resident – without using cameras or other privacy violating means – and ensure that they are living their live as expected. If for some reason they don’t get out of bed, or they don’t go to the bathroom or use the kitchen, an alert can be sent to the family or caregiver.

Even more fascinating, this kind of SHaaS system can also track incremental changes. For instance, if the system recognises that it is taking someone longer to go from the bedroom to the bathroom or if they are no longer leaving the house, this slow trend change will also trigger an alert.

In many ways, a SHaaS system is like having a butler in your house who knows how a home should run. The Smart Home Butler – SHaaS system can further assist the family by turning off lights and adjusting the heating when nobody is in a room or locking back doors when the family leaves. It is a collection of services that analyses input from the smart home sensors, learns how the family lives and how the home is used, and can make intelligent decisions to make the home more comfortable, safer and more energy efficient.

Currently, in addition to WiFi, Bluetooth® and ZigBee®, many of the world’s leading tech companies are introducing their own varieties of incompatible and competing smart home communication technologies. This can present a serious technology and economic challenge for those IoT device makers who actually develop and market the various hardware and software components destined for the smart home ecosystem.

Which one to pick? If an IoT device makers rolls out a line of products based on an emerging standard that unfortunately does not catch on, they could be wasting years of development time and millions of dollars of development costs.

One of the technical advantages of the SHaaS model for IoT device developers and manufacturers is that they do not have to take sides regarding connectivity technologies. Instead of guessing which technology to choose, they simply have to use the one that their service provider partner has selected.

So what does this all mean for device developers who want to be successful in the evolving Smart Home market? Don’t do it alone.

Instead of developing standalone connected devices and appliances for the consumer market and the DIYer, they need to shift focus to the service providers. By working closely with the service providers, they can confidently develop hardware, software and web intelligence to make this dream come true.

The world is changing. The SHaaS is on its way.

Two decades ago, automatic window control and door locking were expensive aftermarket add-ons in our cars. Nowadays, almost every car has those features built in. A couple years ago, backup cameras and sonar were deluxe features, now almost every new car includes it.

Decades from now, our children will look back at our “stupid, unconnected” homes, and wonder how we were able to live in such primitive conditions.

Cees Links was the founder and CEO of GreenPeak Technologies, now part of Qorvo. Under his responsibility, the first wireless LANs were developed, ultimately becoming household technology integrated into PCs and notebooks. He also pioneered the development of access points, home networking routers, and hotspot base-stations. He was involved in the establishment of the IEEE 802.11 standardisation committee and the Wi-Fi Alliance.

He was also instrumental in establishing the IEEE 802.15 standardisation committee to become the basis for the ZigBee sense and control networking. Since GreenPeak was acquired by Qorvo, Cees has become the General Manager of the Low Power Wireless Business Unit in Qorvo.

The author of this blog is Cees Links, GM of Qorvo Low Power Wireless Formerly CEO and founder of GreenPeak Technologies.