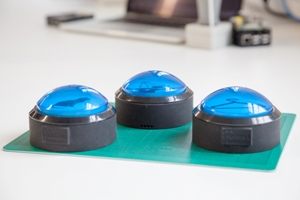 Pips buttons use Bluetooth to create a sequence of audio and visual reminders to help guide those with sensory impairments through their daily routines, and to have confidence while navigating their environment.

Pips prototypes, which have been designed and built by Nominet, can be placed anywhere around the home and flash and beep – to show the next task that needs to be completed – anything from taking medication or brushing teeth to feeding pets. Each Pip is a round button the size of a jam jar lid and customisable – a variety of colours are available along with relevant icons or text as a reminder of the task. Once a button has been pressed, it turns off and activates the next Pip in the sequence.

Nominet’s R&D team has been working to develop Pips as a toy and useful tool for visually impaired children, and has tested a prototype with the Royal London Society for Blind People (RLSB). It has also spoken to many front line professionals and support groups – from senior people within the NHS to occupational therapists to academics to charities – to understand how Pips might be useful for those living with dementia or memory loss.

From today, Nominet is making the code and instructions for building Pips publicly available and open source, so that students, researchers and inventors can build and experiment with their own Pips devices.

David Simpson, ‎senior researcher of R&D at ‎Nominet said “Our team has been exploring spaces where we think our Internet of Things (IoT) technologies might be relevant and are particularly interested in projects that have the potential to deliver social or economic benefits, so health tech projects like this are a win-win in this context.

“We’re proud to have developed this Pips system, have seen how it could help those with visual impairment, and want to encourage others such as medical researchers to investigate how it might be used in other ways and more widely. For example, to help those who suffer from dementia or memory loss – the potential is enormous. This is why we are making the Pips code publically available for free, together with a shopping list of components and instructions to help others build the devices themselves.”

Lennie, a five year old boy, is completely blind after he was diagnosed with cancer at 10 months and the tumour crushed his optic nerves. Lennie’s father, Ed Anderton, explained how this tech has the potential to give children with visual impairments more confidence: “My son Lennie had great fun testing out prototypes of Nominet’s Pips technology. As a child with a severe visual impairment, building up confidence to move freely around his environment is a challenge. The experience of trying out the Pips demonstrated how technology advances such as this can help Lennie build that confidence in a fun and stimulating way. He was really engaged by the game of finding the Pips by following their beeping sounds and pressing the big buttons to trigger the next one. It was a form of play which gave him reassurance and encouraged him to navigate his home, through tapping into his inquisitive nature.”

(See the family’s blog on Lennie’s progress though his treatment at: https://lookingafterlennie.wordpress.com/)

Tom Pey, CEO, Royal London Society for Blind People said, “There are over 35,000 blind and partially sighted children and young people in the UK. Development in early years is crucial for all children, and play is a huge part of that. Sadly, 40% of blind children do not have a neighbourhood friend to play with. Creating suitable toys that help vision impaired children play and interact with other children is key for their development. Nominet’s technical expertise and willingness to share the Pips code publically will hopefully encourage others to develop more solutions to overcome this current block in blind children’s development.”

Nominet’s Pips prototype is built around a Light Blue Bean microcontroller, which uses Bluetooth to send and receive messages via the devices. Once a message is received, a buzzer and LED in the Pip is activated, and once pressed, it will send a message to the next Pip in the sequence to activate that before returning to idle mode. The Pips system can also alert care providers via email or text message if any part of the routine isn’t completed. Additionally, the system requires a ‘gateway’, such as a laptop or Raspberry Pi, to run the software to coordinate Pip behaviour.

Nominet’s development of Pips is part of the R&D team’s wider work exploring the potential uses of IoT technology for public benefit. It follows the development of the Flood Network’s early warning flood map and a set of interoperable tools that help developers improve IoT development. The name of the devices, Pips, is taken from the iconic sound played to mark the start of the hour on BBC radio broadcasts. Like the devices’ sound, it’s unmistakable and reminds users about their key tasks at home.