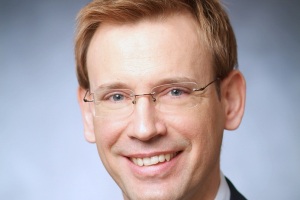 The connected home may seem like common currency now – in 2016 we’re looking at an unprecedented increase in both acceptance and actual hardware running ‘in the wild’ – but the road here has been a long one.

Back in the late 50s there were rumblings, says Thomas Rockmann, VP of connected home, Deutsche Telekom AG. General Electric (GE) unveiled a concept home back then, which included a kitchen complete with pop-up fridge, ice dispenser, plastic plate maker, and ultrasonic dishwasher.

In the 80s a company called Unity Systems launched a product called Home Manager, a very early touch screen device designed to allow control of an automated home using simple screen controls, while in 2000 LG launched what is credited as the first internet fridge. Snappily dubbed the Internet Digital DIOS, it featured a screen of data about the internal temperature etc., and also an MP3 player, perhaps less useful for some.

Now analysts at Strategy Analytics predict that by 2019 nearly 30% of Western European homes will have a type of smart system, with revenues from connected home related hardware, services and installation reaching nearly €15.46 billion ($17.36 billion). Global tech manufacturer Samsung announced last year that 90% of everything that it manufactures will be Internet connected by the end of 2017.

So what’s changed? Well, less of a change and more of an evolution – broadband is now almost universal (80% of adults in the UK now have a broadband connection), and fibre increasingly so in the UK. This has raised connection speeds and reliability. Meanwhile, the penetration of smartphones and tablets has rocketed – in the UK alone, 76% of adults owned a smartphone in 2015, up six per cent from 2014.

An astonishing 32 million smartphones were due to ship to the UK in 2015 – that’s one for each person in the country – and it’s worth remembering, just for perspective, that the modern touchscreen smartphone is just eight years old – GE’s 50’s concept just wouldn’t have predicted it!

As a result of this relatively sudden appearance of the smartphone and its connectivity, whole new categories of connected devices have appeared, birthing a whole range of wearables and kickstarting the IoT in earnest.

In turn, the first generation of smart home devices have started to appear, from lights, thermostats and kitchen appliances through to HVAC and security systems, driven by dropping component costs.

Another core driver of smart home and IoT is the need for technology firms to further differentiate hardware offerings and increase margins, or boost customer lifetime value by bringing to market new subscription-based services and increasing customer loyalty or ‘stickiness’.

The final part of the puzzle is consumers themselves, of course, who are increasingly interested in IoT technologies for a host of reasons. Some home owners are keen to harness the most up-to-date security for their loved ones, some have heightened concern about energy savings, while enhancing and assisting the elderly to remain safely and
happily in their homes for longer is also popular.

However, it is still early days for the connected home, with mainstream adoption still slow – although 29% of UK households have connected entertainment technology in the shape of games consoles, and 24% have a smart TV, only three per cent run a smart security or surveillance system, and two per cent own either a connected thermostat, smart lighting or another connected appliance.

Given the history of IoT so far, the fact that the industry as we see it today is somewhat fragmented will come as no surprise. A veritable smorgasbord of technologies, platforms and standalone concepts are duking it out, battling for manufacturer support, and finally consumer acceptance.

Some manufacturers have created their own platforms and protocols, others have gone with open source or industry standards, while yet more have interpreted industry standards and tweaked them for a host of reasons – some laudable, such as increased security for their customers, some less so, simply to increase margins.

The author of this blog is Thomas Rockmann, VP of connected home, Deutsche Telekom AG.