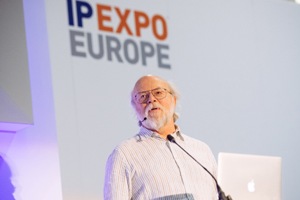 The final day of this year’s IP EXPO Europe began with an educational and inspiring keynote from James Gosling, chief software architect at Liquid Robotics and the creator of programming language Java.

A passionate advocate for Open Source, Gosling discussed vendor lock in at length, urging organisations to carefully evaluate the risks of committing to individual cloud providers. He also provided insight into his latest work on the “lunatic fringe” with Liquid Robotics ocean going semi-autonomous robots.

Once again cyber security proved to be a hot topic amongst attendees with an overflowing theatre greeting independent security researcher Samy Kamkar, an expert best known for deploying one of the world’s fastest spreading computer viruses. Kamkar used this experience to illustrate the various means hackers will exploit to take advantage of organisations and why organisations need to think about adopting radically different strategies to build effective defences.

AI was also front of mind for many, providing lively discussion in a number of sessions, notably Guy Caspi’s explanation of deep learning and its application in cyber security. The Future of the Internet of Things (IoT) panel, which was one of the most popular sessions of the day, also touched on AI and saw Alicia Asin Perez of Libelium, David Spezia of Tableau, Harvey Lewis of Deloitte MCS and James Hatch of BAE Systems debate how IoT is going to change businesses and what an IoT reality looks like.

A world of open, memory-centric computing was also a point of discussion as vice-president and chief technologist EG EMEA at HPE, David Chalmers, took to the keynote stage. Chalmers focused on computing evolution and the move to fully “software-defined” data centres, introducing HPE’s The Machine and addressing the slowing down of Moore’s Law.

IP EXPO Europe will return for 2017 at ExCeL London on October 4 and 5.