Home › IoT News › There’s a battle in the enterprise for ownership of ‘chaotic’ IoT, says Gartner 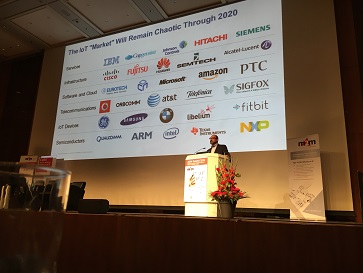 At the recent M2M Summit 2016 in Dusseldorf, Germany, Gartner‘s Research VP, Eric F. Goodness was blunt about the challenges facing the Internet of Things (IoT). These, he said, included a battle for IoT ‘ownership’, a bottleneck of problems facing anyone trying to prove the value of their IoT initiative, and a market characterised by ‘chaos’ — at least until 2020.

“We believe that, in the short term, the M2M sector (machine-to-machine communications) will underperform in bringing services to market,” said Goodness. (Also see: IoT security dominates but standards, data and partnership themes run through M2M Summit.)

As Jeremy Cowan reports, Goodness also made a call for value-added services to accelerate Internet of Things (IoT) adoption. In the last year, he said Gartner has received 576 questions in regard to M2M*, compared to 110 in the previous two years. However, the firm has received 11,100 questions on IoT**, compared to just 626 in the previous two years.

Clearly, the interest in this area is growing fast, as is a thirst for knowledge. He gave the example of a large real estate developer that builds manufacturing sites worldwide. They want to be able to provide their clients with IoT-as-a-Service (IaaS) so that none of their sites will now be built without IoT enablement.

Goodness described seven market trends. The key trends (and his examples) are:

“There is a battle for IoT ownership,” said Goodness. He suggested that a focus on business transformation is pulling in one direction and technology implementation in the opposite direction. The “owners” of the IoT initiative in an organisation back the business transformation; these may include the chief executive, chief operating officer, and chief marketing officer, plus business unit leaders, backed by the chief information services officer. Meanwhile, those with a focus on technology implementation may include the chief information officer, perhaps supported by the chief technology officer and the enterprise architecture (EA) team.

For now, he sees IoT being championed by business units (BUs) in large enterprises. “Through 2018, return on investment (RoI) will drive the Internet of Things, dominated by simple use cases,” according to Goodness.

He quoted a Gartner survey in Q3, 2016 of 529 organisations in the US planning or using internal IoT. Over three-quarters (78%) said they were aiming to optimise operations such as workflow management and supply. More than half (57%) stated that their focus was to improve asset management, for example by predictive maintenance of equipment. While 46% were focused on better buildings or facilities management through smart lighting, energy management, and access control.

When asked what external IoT initiatives they were planning or implementing by Year End 2018, out of 441 US organisations 66% were working on smart, connected products that allow customer data to be received by the enterprise. New, non-revenue-generating customer services, such as enhanced product features, were the drivers for 62% of IoT projects.

Almost half (48%) were working on customer orders from smart devices (e.g. automatic replenishment), while 43% aimed to deliver new, revenue-generating services for customers. Finally, 8% spoke of work on connected homes.

Goodness believed there is a “paralysis of analysis” afflicting companies trialing IoT services. The factors blocking progress are a lack of (or lack of agreement on) device management, edge analytics, IoT protocols, financial investment, DevOps, APIs (application program interfaces), and AEPs (application enablement platforms). These are fighting their way through processes of due diligence and proofs of concept, on their way to extended trials, risk mitigation and delivering business outcomes.

One of the Strategic Planning Assumptions (SPAs) that can be made about IoT is that, by 2018, 20% of the top global enterprises will implement mobile virtual network operator (MVNO) capabilities of some scale in support of their solutions. Among the arguments supporting this assumption are that becoming an eMVNO (enterprise MVNO) allows global multinational corporations (MNCs) to scale IoT solutions across all their business units and product sets. There could also be huge CapEx and Opex reductions.

Set against that, said Goodness, most MNCs aren’t aware of the possibilities that becoming an eMVNO can offer. Many MNCs will be reluctant to invest in additional operations and management. More controversially, he suggested that communication service providers will remain a “reluctant provider” of IoT services for as long as possible.

*Gartner Glossary: Definition of M2M: Machine-to-machine (M2M) communications is used for automated data transmission and measurement between mechanical or electronic devices. The key components of an M2M system are: Field-deployed wireless devices with embedded sensors or RFID-Wireless communication networks with complementary wireline access includes, but is not limited to cellular communication, WiFi, ZigBee, WiMAX, wireless LAN (WLAN), generic DSL (xDSL) and fibre to the x (FTTx).

**Gartner Glossary: Definition of IoT: The Internet of Things (IoT) is the network of physical objects that contain embedded technology to communicate and sense or interact with their internal states or the external environment.