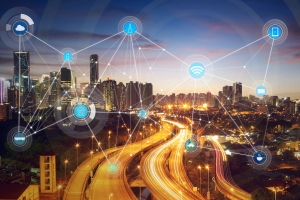 Smart cities are big business. Smart commercial buildings are taking the lead, with analyst firm Gartner predicting there will be 518 million connected things in use in commercial buildings by the end of this year. A stellar increase of 86% over 2015. Following on from this it is forecast there will be over a billion devices in connected homes by 2018.

Commercial real estate benefits enormously from IoT deployment. IoT creates a unified view of facilities management as well as advanced service operations through the collection of data and insights from a multitude of sensors, especially in large sites such as industrial zones, office parks and shopping malls, according to Bettina Tratz-Ryan, research vice president at Gartner.

It is estimated, for example, that IoT will cut the cost of energy, spatial management and building maintenance by up to 30% says Emil Eifrem, CEO, Neo Technology.

In theory this all sounds great. The technology embedded in smart cities has the power to change all our lives. But how are we actually going to manage the complex infrastructure that makes up a smart city, ranging from multiple sensors, networks, servers, power grids and smart meters to smart traffic flows and power grids?

Behind this mesh of connected devices are highly sophisticated data structures with many nodes. Here data is constantly moving, in renewal and transit. At the core of this we have multiple municipal or outsourced databases capturing infinite streams of big data.

At the same time the connections between connected devices can change fast. When a new device or sensor comes online it will probably need to intelligently search out the relevant controllers it works with. The powering up or phasing out of devices have the potential to crash connections.

Connections on a grand scale The majority of IoT smart city applications need to utilise one or more data sets that are each highly connected in their own right, and more often than not linked to one another.

These connections include rich data, such as type, quality, weight etc., which can be presented in a graph database as an integral part of each relationship object. In this schema, relationship attributes show each connection, while attributes may highlight when the connection was created or the type of connection, for example. Because of the changing nature of smart cities, these attributes can change quickly.

Yes, it is theoretically possible to show these connections in any number of database management systems.

Industry analysts agree. “Graph technology will allow the Internet of Things to be represented transparently, without the need to force fit into arbitrary relational models,” sums up analyst firm Ovum.

The beauty of graph query is that it can handle relationships at scale where relationships between items of information are key, no matter how fast they change.

With the rise of networked smart cities and IoT, we will see the power of graph databases truly come into their own – helping reshape the urban landscape forever.

The author of this blog is Emil Eifrem, CEO, Neo Technology