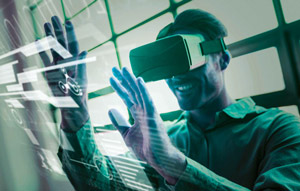 Virtual reality (VR) hit the headlines in a big way recently with commercial launches of VR headsets into the consumer gaming markets and there has been much publicity in the B2B media about possible applications for the technology. By comparison, augmented reality (AR) seems like a poor relative; however, as is to be expected with artificially-generated realities, things are not what they seem, writes Peter Dykes

So far as AR’s relationship to VR is concerned, they are at best distantly-related cousins. VR is a completely synthetic environment and the user can see nothing of the real world, a characteristic which tends to define and in some ways limit the use cases for it. Only a small number of those use cases involve things that people do on a day-to-day basis, because most routine activities require us to see the real world all of the time. AR is all about seeing the world in the usual way, but with the addition of relevant, contextual information. It’s important to be clear about this difference between the technologies because it not only dictates use cases, but technological development and market growth. AR has been around for a few years now in one form or another, but it is far from a mature technology in terms of transparent usability. To begin with, a state of the art ARenabled smartphone is something that still comes between the user and the real world. It’s not adding anything to the user’s field of view, indeed, the user is looking through the phone’s camera and they are not hands-free. To achieve true AR, there must be a highspecification display technology which incorporates high outside world transparency and a wide field of view. In addition, it must be voluntarily wearable rather than something which has to be worn, and the technology has to be inherently scalable. Basically, it should be something that the user would want to wear, which delivers an immersive experience and is scalable.

While VR has major use cases in areas such as entertainment, medical procedures and therapies, AR applications are arguably more extensive in that they can create massive efficiencies and cost savings by providing an adjunct to more mundane activities such as logistics, warehousing, retail and aspects of the automotive industry. However, because AR as an enabling technology depends largely on the availability of real-time aggregated data, its success and future growth in the enterprise sector is tied very closely to the widespread adoption of IoT networks. As more enterprises adopt IoT, so the market for AR will grow.

Greg Taylor, the general manager at digital products company Tigerspike says, “We know AR and VR are big business, but Tigerspike believes that 2017 will be the year that sees AR becoming more prevalent in industrial usage and skilled trades. Providing wearable AR solutions in fields such as construction directly to engineers or on-site staff will significantly reduce human error, safeguard on-the-ground workers and accelerate the learning curve for training employees whilst reducing costs and timelines.”

Taylor adds that employing IoT, data, and analytics through agile and connected technologies is going to be critical to the success of AR. This is a view that is echoed by other interested parties outside the immediate sphere of IoT. Indeed, without those agile and connected technologies such as AR, IoT’s growth could to some extent be stunted, so it is therefore worth taking the temperature of the VR market by looking at the progress of companies focused on enabling AR.

One such is Oxford, UK-based display technology specialist WaveOptics, which started commercial operations in 2014, and which plays in both the enterprise and consumer AR markets. While the company doesn’t market a branded product, it develops and sells what it refers to as an essential ingredient technology which enables data to be displayed on a wearable AR device. It works with large enterprises, solutions providers and systems integrators, who then feed its products into verticals such as front and back-end retail, field services, logistics, heavy industry and the medical sector.

WaveOptics CEO and co-founder Sumanta Talukdar says, “Because of such applications, the development of IoT is playing directly into our hands. One of the things about IoT is that it is great at being able to generate all that data, but if you cannot distil it into something that is contextual, then you haven’t really unlocked the full potential of the technology.”

The one area where IoT and AR are far less dependent on each other for market traction is the consumer sector. While companies such as WaveOptics are seeing significant demand in the consumer market, IoT rollout is having little effect because the technology drivers are very different. In the consumer AR market, the imperative is to move the application from the smartphone to something more wearable.

Talukdar points out that most people are already walking around with a supercomputer in their back pockets, so the first step is to produce a companion device which represents a low entry barrier for AR. Then, as end users realise the benefits of AR-enabled data, there will be migration from the smartphone to a wearable optical device as power efficiency and bandwidth are increased and data aggregation latency is improved. These developments are happening and for AR vendors, the consumer market is rapidly catching up with that of the enterprise sector.

This makes for an interesting comparison between the markets for IoT and AR. Both are benefiting from increasing demand in the consumer sector, although both are dependent on developments in radio technologies in one form or another. In the enterprise/industrial sector however, AR is very much dependent on the successful adoption of IoT if it is to offer savings in cost and efficiency. To put it bluntly, if the data isn’t available, enterprises will have little use for AR.

Improving data security will create the next IoT boom

The security of the internet of things (IoT) remains a key barrier to its proliferation. Research analysed by Business Insider found that 44% of American consumers were “very concerned” about the possibility of information and privacy leaks becoming a reality when it comes to their connected devices, indicating the scale of the concern, says Jocelyn Brown, freelance

In a new Palo Alto Networks study, technology leaders have acknowledged they need to step up security to face an IoT influx.Smart teddy bears, implanted heart monitors, electric cars and other connected devices are regularly connecting to corporate networks, prompting technology leaders to warn that significant action should be taken to prevent these devices from