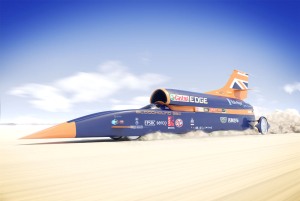 Sierra Wireless, a provider of fully integrated device-to-cloud solutions for the Internet of Things (IoT), announced it is providing state-of-the-art wireless connectivity to the Bloodhound Supersonic Car (SSC).

This unique car, which will travel faster than a bullet, uses the same connected car technology that Sierra Wireless is providing to transform the next generation of automobiles worldwide.

Utilising Sierra Wireless AirPrime® LTE embedded modules, AirLink® gateways, management services and technical support, the Bloodhound car will be able to send and receive critical data, including live streaming video feeds during its test runs in the UK and the subsequent attempts at the world land speed record in South Africa.

The current record stands at 763.035mph and was set by Bloodhound SCC driver Andy Green in 1997. The Bloodhound Team is aiming to raise the world land speed record to 1,000 mph and inspire the next generation of scientists and engineers. “Like Bloodhound, we share an enthusiasm for promoting innovation and collaboration between teams of engineers to break barriers. As more and more connected cars run on our roads worldwide, it’s fitting that the world’s fastest car will use the same core wireless connectivity that’s powering connected car applications and services in more conventional vehicles.”

“The primary objective of the Bloodhound Project is to inspire the next generation to get involved in science and engineering,” said Bloodhound Project director Richard Noble. “To do that we need to deliver the best possible live footage from the car even as it breaks the sound barrier, and we wouldn’t be able to achieve this without the cutting-edge connected car technology and support from Sierra Wireless.”

In order to provide live data feeds from the car as it travels at extremely high speeds at and above the speed of sound, a custom LTE/4G wireless network was created for the project.

In addition to collecting valuable vehicle data, the system will provide a live video feed from the car that can be watched by students in schools worldwide with the goal of getting more young people interested in engineering and science.