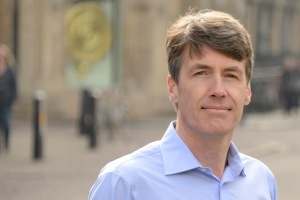 OK, so that’s what the Internet of things (IoT) is NOT about. Here Jeremy Cowan, editorial director of IoT Now, asks Pilgrim Beart what is really being achieved with IoT. He should know. Not only is Pilgrim DevicePilot’s CEO he is described as the man behind the smart home technology Hive which was sold to British Gas in 2015 for $100 million.

IoT Now: In which areas are consumers first seeing the IoT benefiting their daily lives?

Pilgrim Beart (PB): Although there is a natural tendency for people to focus on the “shiny” new gadgets, in all honesty many of these are well-deserved members of the so-called “Internet of Shit“. Objects have been connected to the internet for no apparent reason, and with no thought given to usefulness, security or anything else.

I suspect it’s already true that the ways IoT benefits normal people in their daily lives are largely invisible, or nearly so, and will remain this way even as the number continues to grow at an amazing rate.

Imagine someone waiting for the bus home – it’s entirely possible that the wait time displayed on the board is driven by GPS receivers on the buses, that the street is lit by connected streetlights (there are more than a million deployed globally, ensuring good lighting at the lowest cost), and that the bins at the end of the street have been emptied just before they overflow, thanks to inbuilt connected sensors.

IoT Now: How does this vary from region to region (e.g. Europe, APAC, N. America)?

PB: The UK is not only geographically in between Europe and America; it seems to sit in the middle of them in terms of approach too. America is classically “shoot first, ask questions later”. To continue to focus on street lighting, we see some players in particular parts of America going all the way to delivering “light as a service”. However, it’s very patchy, just like cellular rollout was in the US.

Meanwhile in Europe, cities are methodically deciding to roll-out the smart city service by service. They are doing so in a comprehensive way and with a mind to how an initial pathfinder application (like streetlights) can then grow to encompass other applications too (smart parking, smart bins and others).

In some Asian cities they seem to be doing larger, more occasional IoT initiatives as part of the “greenfield” construction, whereas the opportunity in Europe is much more about retrofit.

IoT Now: Do companies generally embrace ‘servitisation’ of their products, or is it more often a struggle against entrenched views and we’ve-always-done-it-like-that attitudes?

There are huge potential benefits to be had – principally from getting much closer to each customer and discovering what they really need, but it is not without its challenges too.

IoT Now: You’ve previously mentioned British Gas as a good example of the change. Can you tell us how they are transforming their business model to become a service business?

PB: What I think made Hive (an internet-connected home heating control hub) so interesting to British Gas is that they were, prior to that, just a seller of a commodity (energy) that were being forced to sell less and less because of climate change – which is not a very nice place to be. So, with what was really quite surprising enlightenment, they decided they had to change the rules and find a proposition which brought much greater value to their customers.

This justified their position as a premium brand and diversified their service offering, similar to the way that telco likes to offer a “bundle” of propositions to their customers. And it worked – Hive drives a +50 improvement in Net Promoter Score (on a range -100 to 100) – beyond the wildest dreams of a utility company.

The eventual result is that Connected Homes is now a division which sits alongside British Gas under the Centrica umbrella – no mean feat. British Gas has continued to acquire propositions around Hive, for example their recent acquisition of FlowGem. So, British Gas were already definitely a “service” company, but by introducing IoT they’ve hugely extended the range of services they can offer – and thus their value to the customer.

IoT Now: How can you help?

PB: There are many potential benefits to connecting devices and there are many potential pitfalls. The first step to grasping the benefits and avoiding the pitfalls is to be able to see what is going on. This might sound obvious but as you go from 10 test devices to 100 trial devices and then 1,000 initial production devices, there all-too-easily comes a point where you realise that you have lost the wood for the trees.

You have plenty of incoming support and operations issues but you’re not really sure which devices are working properly (as in, doing what the customer is paying for) and which are not, and therefore which customers are happy and which are not.

Specifically, DevicePilot is a cloud service which does three things:

IoT Now: We’ve heard of Sprue’s smart fire alarm business, and Switchee’s smart thermostats. What can you tell us about them?


PB: Best to talk directly to them, but essentially Sprue are Europe’s leading smoke alarm manufacturer (with First Alert and Fire Angel). They have discovered that they can predict the propensity of properties to have fires, based on past behaviour such as near-misses, and so connecting the alarms could enable a very exciting potential to bring about “fire protection as a service”.

Switchee deliver connected thermostats to social housing. It’s a bit like Hive but its focus is on ensuring that vulnerable people are warm enough, not spending too much money and that they are not exposed to health risks from things like mould. Being online means that this “looking-after” can be done by the housing association for example, at scale across all of their properties.

IoT Now: Finally, Gareth Williams and Bonamy Grimes have been mentioned, too. Who are they?

PB: They are the founders of SkyScanner, the flight booking service which was recently sold for UK£1.4 billion (US$1.75 billion). Gareth is still the CEO, Bonamy was the CTO for most of its growth. Both are investors in DevicePilot and play an active role in advising the company.