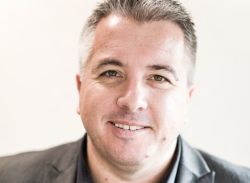 I wanted to be a TV cameraman: the thought of being involved with the creation of something that impacts people’s lives so much, and the fact that it wasn’t sat behind a desk all day, which is something I never wanted from a job. I even remember considering the Air Force as a navigator, although after experiencing an aerobatic flight for my 41st birthday, that career would have been short lived.

2.  If you had one business lesson to share with your younger self what would it be?

‘Bad news early is good news.’ Give yourself clear objectives and initiatives and have leading indicators to make sure you are on the right track.

3.  Which Internet of Things (IoT) use case study has recently fired your imagination?

Riverbed has blended new consumer technology with its SteelConnect SD-WAN technology and made it possible to manage the global WAN using voice commands through the Amazon Echo Dot.

In this video, Riverbed’s director of Solutions Engineering, Romain Jourdan, showcases how he’s leveraged the Alexa Skills API and SteelConnect REST API to create new branch office sites around the world in minutes just by using voice commands.  This was very cool and makes a difference from typing ‘conf t’ in a Cisco!

4.  What lessons have you learned from doing business in other countries or organisations?

Meeting etiquette has been the biggest lesson in ensuring you make the best use of the time you have with clear actions at the end. In the UK, often meetings will go on over the allotted time, in many other countries you have the allotted time and that’s it. Most importantly, we are all the same. Just treat people how you would wish to be treated and show integrity and everything will be fine.