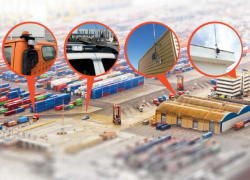 Actility provides the inside story on the deployment and testing of a location and tracking solution for IoT devices in the Port of Barcelona, Spain, using a low power wide area network.

Low Power Wide Area Networks (LPWAN) are an ideal communications technology for industrial IoT applications, enabling remote sensors and devices with minimum power consumption to be connected using a long range radio network that is extremely cost effective and straightforward to deploy. Actility is a pioneer and co-inventor of LoRaWAN, an LPWAN technology which uses unlicensed ISM (industrial, scientific and medical) radio bands for bi-directional communication with IoT devices. The ability to locate and track objects, animals and people using these IoT devices is set to revolutionise industry verticals from agriculture to manufacturing.

“We believe that accurate location capabilities combined with LPWA networks are a game-changer in the logistics sector, delivering increased efficiency in resource and supply chain management, at revolutionary total cost of ownership (TCO) levels much lower than conventional cellular/GPS tracking solutions,” says Mike Mulica, the chief executive of Actility. “Geolocation and tracking could possibly be the biggest use case in the whole of the Internet of Things, based on the amount of interest we’re seeing in our location service portfolio.”

The challenge now is to roll out robust, industrialised solutions that deliver on that game changing potential.

LoRaWAN is evolving rapidly, driven by the needs of industrial customers. Existing tracking solutions used devices containing a GPS receiver, communicating their location over the LPWA connection. This eliminates the need for a power-hungry cellular connection, and a potentially costly M2M subscription, but the GPS receiver is still a battery hog. Unlike pure LPWA devices, which can have a battery life in the field that is measured in years, a GPS tracker may need recharging every few weeks depending on usage.

Thanks to the work of Actility, Abeeway, Semtech and other members of the LoRa Alliance, there is now a network-based alternative, able to locate and track any device connected via LoRaWAN. This solution was to be tested and demonstrated in a real world environment around the ZAL Port of Barcelona, making its debut in the spotlight of Mobile World Congress earlier this year.

To deliver the network at the ZAL, Actility teamed up with Tracktio, an industrial tracking and IoT solutions specialist based in Barcelona and Madrid. Tracktio already had a LoRaWAN network deployed in the City of Barcelona, but network based geolocation calls for new gateways – the base stations that receive radio signals from connected devices – built to the latest standards. Together, Tracktio and Actility selected Cisco IR829 and IXM LoRaWAN gateways.

In a LoRaWAN network, devices are not connected to a single base station; instead signals are received by any base station in range of the device, and passed to Actility’s ThingPark network server. Network-based geolocation relies on measuring the different arrival times of signals from the same device to different gateways, and triangulating the position of the device based on how far it is from each one. The new V2 Cisco gateways are equipped with GPS receivers, which not only allow their location to be very precisely determined, but also provide the synchronised time signal that allows the difference in signal arrival time to be measured precisely.

To enable the triangulation process, the network gateways must be deployed densely enough that the signals from each device are received by several gateways; in the case of the ZALPort, Tracktio and Actility radio planners determined that six gateways would be needed to cover the multimodal logistics facility’s approximately four square kilometre area. Thanks to the fact that LoRaWAN uses unlicensed radio spectrum, the network can be deployed very quickly. “The most complicated part is simply getting permission to mount gateways on the roof of the various buildings,” says Tracktio’s Pablo Recolons. “Actually deploying and commissioning the network only took around two days.”

The plan was to use the LPWA network to track security and maintenance vehicles and personnel around the port area. For the tracking devices, Actility turned to long-standing partner in tracking solutions, Abeeway. Established in 2014 to commercialise IoT geolocalisation devices, Abeeway’s portfolio includes both consumer and industrial trackers. For this demonstration, a combination of Micro Balise, keyring size trackers, and Master Tracker industrial devices were selected. The smaller devices would be worn or carried by personnel, whilst the larger trackers – which have the same functionality enclosed in an industrial casing with a larger battery – were fixed to security cars and maintenance trucks. Both these trackers have on-board GPS receivers, the goal being to compare the position results obtained using GPS, which will be accurate to within a few metres, with the results from the network-based method.

However, using the Abeeway devices with the ThingPark Location Server also opened up the possibility of real-world testing of a unique new location capability based on patented technology. GPS relies on signals from multiple satellites to locate the receiver, requiring the device to track and lock on to up to six satellite signals, and then perform some complex calculations to determine its location. Abeeway’s patented alternative provides a form of Assisted GPS. The network server maintains a database of the location of all GPS satellites, and can instruct the device which ones to lock onto, which speeds up the initial fix time from up to a minute or more to a matter of seconds. Once the tracker has received the GPS signals, they are communicated immediately to the network server, and the position calculations are done in the cloud. This dramatically reduces the processing power needed by the device, bringing down its cost and power consumption substantially. The end result is a technology that promises to deliver the same accuracy as GPS, with a power consumption only 10% higher than purely network-based location.

The complete solution – Abeeway trackers, Cisco gateways, Tracktio network, Actility server and Abeeway application – was up and running on 22 February 2017, a few days before the crowds descended on Barcelona for MWC, and only a few weeks after the project kick-off.

This demonstration network allowed Actility to test the full portfolio of location solutions which go to make up the Thingpark Location service, which exposes locations determined by any method through a single application programme interface (API). The different techniques have different applications: GPS and A-GPS are used where high accuracy is needed and require dedicated device, whereas the network based solution can locate any device, but is likely to be less accurate. The target for network-based geolocation is to achieve an accuracy of better than 100m, which is all that’s necessary in many use cases, such as determining whether a vehicle is in one depot or another, for example, or geofencing to detect when an animal strays outside boundaries. According Sitha Oum, Actility’s project manager, the results were very encouraging. “We were consistently seeing a network location within around 50-100m of the location determined by GPS,” he says. “And we also proved that the A-GPS solution is as accurate as the solution calculated by the device, which is a green light for the roll-out of this bestof-breed technology.”

In the near future, ThingPark will also integrate the capability to geolocate Abeeway devices using WiFi network sniffing, in which the combination of network identity and signal strength matched to a global database extends the reach of the solution indoors.

“IoT is often touted as a transforming technology for all industries,” says Olivier Hersent, Actility’s CTO and founder. “Sometimes, it’s difficult to decide if it is hype or reality. But for the logistics industry there is no doubt that using LoRaWAN in location is a revolution. Introducing an order of magnitude cost reduction in a price-sensitive industry doesn’t happen that often in technology. For tracking, though, it is happening for real, right now.”