Home › IoT News › PTC puts on the pizazz at LiveWorx17, then discussions get serious about IoT’s problems 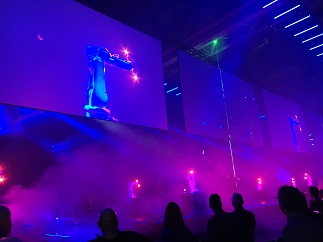 You couldn’t accuse PTC‘s president and CEO, Jim Heppelmann of a low-key kick-off yesterday for LiveWorx17, the Massachusetts-based company’s annual gathering of customers, industry analysts and a handful of house-trained journalists.

As IoT Now‘s Jeremy Cowan found, there was no disguising the growing awareness that vendors in the Internet of Things are facing an uphill battle in some sectors to overcome IoT scepticism and fear of failure among corporate end users of industrial IoT. Technologically, there was much to inspire and amaze as a range of companies in PTC’s partner ecosystem took turns in the spotlight, but discussions with delegates kept returning to the battle they face with departmental colleagues and senior stakeholders over proposed IoT deployments.

These are discussions with which PTC and their partners are familiar but, for some IoT evangelists it’s a struggle nonetheless. I’m getting ahead of myself, though.

From the start, there was a resolutely upbeat tone to the opening as you’d expect. In his keynote address, Heppelmann focused on PTC’s history in computer-aided design (CAD) and product lifecycle management (PLM). He pointed out that historically most manufacturers have ignored the ‘L’ for Lifecycle in PLM. They had no idea what became of their products once they left the factory gates. Now, the Internet of Things was enabling them to connect with and remotely monitor the condition, usage and entire lifecycle of their products. “IoT is the next generation of PLM,” he said. “Products used to labour on in the field for years or even decades. But now we collect data from similar assets worldwide, bringing it back into the digital world to find out how it’s used, how it’s working and how to improve it. It gives us deep digital understanding of a product’s design. Now we’re crossing the next boundary to artificial intelligence (AI).”

Will anything be unconnected in the IoT age?

An air of realism was taken up by Robert Schmid, the chief IoT technologist for Deloitte, who leads his company’s strategic alliance with PTC for users of the IoT platform ThingWorx. He moved among the audience, challenging anyone among the several thousand present to stand up if they believed that some Things would remain unconnected. Two took up the challenge, the first citing the penny coin in his pocket, the second raising his cup of coffee. “This coffee,” he said, “has a half-life of 20 minutes.” Both may well be correct, but it was perhaps significant that the (admittedly partisan) audience mustered only two who doubted that everything in life would one day be connected.

Schmid went on to ask his audience where they encounter problems in their organisations. Again another two were brave enough to declare — one in the defence sector and the other in aerospace — and both said they find some other departments fail to see the benefits. Among the reasons given for this reluctance or inability are the costs of deployment, the lack of proven benefits, and concerns over data security. One delegate added ruefully, “Or at least, those are the reasons they give.” Schmid’s advice is simple and it was widely shared by PTC executives over the two-day conference. It is best summed up as “Think big, Start small, Scale fast”.

The problem of perception and therefore of IoT revenues has been reported elsewhere. In the last few days, chipmaker Intel (NASDAQ: INTC) reported an 11% year-on-year rise in revenues for the quarter to US$721 million. It did not go unnoticed that earnings from the Internet of Things, often cited as a key growth market by CEO Brian Krzanich, represented only 5% of that total and only 3% of profits. The company recently agreed to buy imaging systems company, Mobileye for an eye-watering $15 billion, so Krzanich and team clearly expect to see a significant return on investment from autonomous vehicles, one of Intel’s four target areas of IoT — the others being industrial IoT (IIoT), IoT video solutions, and wearable devices. Rival, Qualcomm recently claimed that its ARM-based chips now power more than 80% of all Android Wear devices, so Intel has its work cut out.

Speaking to media and analysts this morning, Heppelmann asked rhetorically: “One challenge for us is how do you walk into a factory for the first time and make an immediate difference? Some of our clients have hundreds of factories and they’re all different. For us, it’s about plugging together the Lego(TM) blocks quickly and iteratively. Or strategy is to complement, not rip and replace. We don’t pick fights with what’s already there.”

Paul Boris, Vuzix CTO, gave some sage advice to a breakout session entitled Augmenting the Industrial Enterprise. “Don’t try to get everyone (in your organisation) aligned immediately. First, build a coalition of willing partners. My model is to host a party, with better drinks, food and music. Gradually, people will peel away and come to your party.”