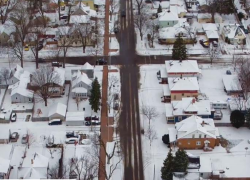 In the City of Holland, Michigan, USA, the board of public works has turned to IoT to manage its Snow Melt system for clearing foot paths of snow and ice around the city more effectively. Here, we explore how AT&T’s Flow was utilised to enable the city to design and develop a wireless sensor network.

In Michigan winters are tough with extended periods of snow and sub-zero temperatures. The City of Holland has sought to keep pedestrians safe from slipping on ice and snow by installing a Snow Melt system which uses waste heat from the city’s power generation plant to thaw pavements across the municipality. Whilst ideal for its purpose, the system is costly to operate requiring heat to be pumped around the city to ensure all areas receive heat to enable thawing to occur.

“The Snow Melt system has been of tremendous value,” confirms Peter Hoffswell, the broadband services manager and technologist at the Holland Board of Public Works. “Without the Snow Melt system, our downtown would basically shut down. It’s using waste heat from the process of producing power in our power plant but we do have to run pumps. These pumps are very large and the less we can run them, the better so I was wondering if there could be a way we can optimise our Snow Melt system by adding a sensor system to it.” 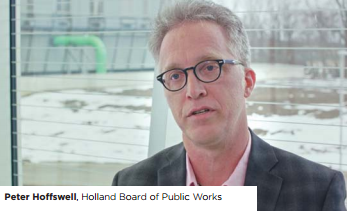 Colleague Carl Thorwall, an electric power engineer at the Board of Public Works, takes up the story: “We never really had a good way of measuring temperatures and performance,” he says. “The challenge was always how do you get the wires back to the powerplant but Peter had the idea of using wireless and connecting a temperature sensor in a [paving] brick and the project blossomed from there.” Hoffswell began experimenting to develop a way to measure temperature throughout the city, turning to the AT&T Starter Kit to create a prototype device. “Our first prototype is a box with the AT&T IoT Starter Kit and a set of sensors,” he explains. “At the heart of the system is AT&T Flow which makes the development process very easy.”

“One of the great things about Flow is that there is an online code sharing component to it so the example code that other people have developed out there and are willing to share is available,” Hoffswell adds. “That’s like a goldmine because you don’t have to figure it out yourself. Someone else has already done it for you.”

The project swiftly gathered pace. “With Peter’s prototype we’re looking at making a smart brick where we reduce the size of the prototype and package all of the electronics in the back of a brick,” says Thorwall. “We’d then monitor the temperature of the brick that is inserted into the paver slabs, giving us the actual temperature of the various areas downtown.”

In this way a network of sensors covering the downtown areas of Holland will be created. “If I didn’t have Flow then I would have to hard code it myself,” adds Hoffswell. “It is great because I can bring the raw data from our sensor out in the street and react to it. My AT&T Flow has a Twitter integration so if the temperature falls below freezing at street level, we’re in trouble and we’ll actually get a tweet alerting us.”

This translates into operational cost savings, as Thorwall explains: “Having the ability to monitor the temperatures of bricks gives us the capability to reduce the pumping load and this saves money on energy and pumping costs for the city.”

For Hoffswell, the ease of development offered by AT&T Flow has been a key enabler of the project. “The AT&T IoT Starter Kit really gives you the full set of tools,” he says. “Not only the hardware but the software that allows you to go from an idea to a prototype to an actual running production device.”

About the AT&T IoT Starter Kit

The kit contains the following items enabling developers to get started with systems to address many different types of IoT applications. These include: 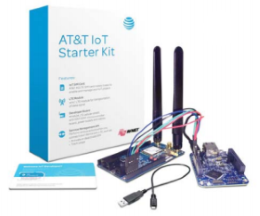 The AT&T IoT Starter Kit is a complete developer kit with all the tools, services and integrations needed for design, build, deploy, manage and scale-up of IoT projects. All the capabilities that are needed for a project to scale up from prototype to production come in the kit, so users can: prototype, build and host IoT applications with AT&T Flow; launch, manage, and scale a connected device business or enterprise deployment from the AT&T Control Center; and access the data plans and SIMs required to fully address each project. The AT&T IoT Starter Kit comes with 300MB of data and additional data can be added as projects grow.