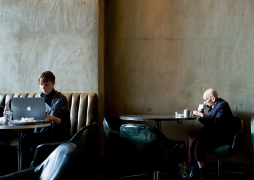 On what would have been Joseph Markovic’s 90th year, his much loved photography journal ‘I’ve lived in London for 86½ Years’ is released as an immersive digital experience click here.

Advanced eye tracking technology seamlessly combines with beautiful interactions, image augmentation and original sound design to draw you into the world of two unlikely strangers that changed each other’s lives.

Joseph Markovitch was a man who lived in London for 86½ Years. He left only once to go to the seaside with his mother, loved Nicolas Cage, had five sugars in his tea and would have married a six foot Hispanic woman if given the chance.

‘I’ve lived in London for 86½ years’ was published by Hoxton Mini Press, an independent East London publisher of collectible photography books, in 2014 and instantly became a local cult classic. Martin Usborne, the company’s founder, began his professional life as a photographer and after a chance meeting ended up documenting Joseph’s life, via his portraits, for over two years.

On the year that Joe would’ve turned 90 years old, 86andahalfyears.com invites you to step into the world that Joseph and Martin shared; experiencing it through both of their eyes.

Clubhouse set out to create an experience that captured the purity and authenticity of the original book; brought to life in a new and immersive way.

Inspired by the format of the book, 86½ Years follows a double narrative, taking the user on a journey into Joe’s life while hearing how he was instrumental in changing Martin’s.

Each chapter is split into two parts, and navigated intuitively with eye-tracking technology quietly working in the background to enhance the narrative. The simple closing of the eyes is all that’s needed to step fully into the world of Joe’s imagination. Once closed and with the distractions of life removed, Joe begins to share this thoughts and feelings from an eclectic mix of topics ranging from money, to relationships and the Universe.

As Joe finishes, the opening of your eyes reveals the original still photograph Martin took to accompany Joe’s words; brought to life for the first time through moving image, alongside the photographer’s memories of the day and the time they spent together.

A subtle, evocative soundtrack was composed to play throughout the experience. Recorded on a local, open-back stand-up piano the music was composed to represent the conversation that took place between Joe and Martin. To create the soundscapes, Clubhouse enlisted sound design studio ‘Small Press Music’, who are also local to the area so well-trodden by Joseph.

86½ Years aimed to capture the best of Clubhouse’s multi-disciplined content and digital teams, who work collaboratively and passionately together on self-funded projects. Every member of the team was involved at various stages, working closely with Martin and Hoxton Mini Press to honour the original content and context of the book. From concept through to release the project took Clubhouse 11 weeks to complete, but it’s a story that’s been 90 years in the making…

Martin Usborne of Hoxton Mini Press said, “An element of my own loneliness exists in the photos of Joseph. A good photographic portrait always captures two people: the subject and the person taking the picture.”

According to Dan Coppock of Clubhouse Studios, “Every single element of the 86 ½ Years experience was designed, written, built, recorded, shot and composed in East London, where Joseph was born, raised and lived his whole life. As an East London studio alongside Hoxton Mini Press, it was important for Clubhouse that the project honoured the authenticity of the original story, and Joseph’s clear love for the area and the people within it.”