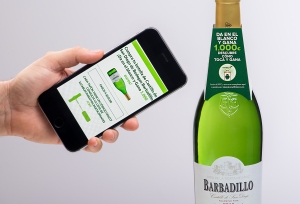 This national campaign includes 126,000 NFC-enabled ‘smart’ bottles of Castillo de San Diego and is believed to be the largest global deployment of NFC to date within the wine and spirits industry. The connected bottles are being sold through 15 major supermarket chains and superstores, including El Corte Inglés, Carrefour, Hipercor, Alcampo, and Eroski.

Through a customised NFC-enabled neck collar, consumers are instructed to tap bottles of Castillo de San Diego with their smartphone to learn more about the promotion, which offers the chance to win 12 distinct €1,000 prizes. Upon purchasing and opening a bottle, customers can retrieve a unique code printed on the cork and enter it in the field displayed on their smartphone – along with their name and other personal information – to instantly determine if they are a winner.

The campaign, which also includes television, online, and outdoor advertising support, was launched on July 17 and will run through August 31. Several winners have already been identified.

SpeedTap tags are thin, flexible labels that integrate with a product’s packaging or label and can be read instantly (without the need of an app), with the tap of an NFC-enabled smartphone or device. Each tag is uniquely identifiable and is virtually impossible to clone. Once tapped, the tag wirelessly communicates with Thinfilm’s cloud-based software platform – CNECT™ – to instantly deliver targeted, relevant content from the brand or manufacturer.

The ‘Dando en el Blanco’ campaign is the second instance Barbadillo has incorporated Thinfilm’s NFC technology in one of its products. In February of 2016, the winery launched its Versos 1891 ultra-premium sherry in bottles that featured Thinfilm’s OpenSense™ NFC tags.

“Given the success Barbadillo experienced in using OpenSense tags with Versos 1891, we were eager to explore other ways to deploy the technology,” said Alvaro Alés, director of Marketing & Communication for Barbadillo. “As a family-owned winery, connecting directly with consumers has always been important to us. Thinfilm’s NFC solution gives us a proven channel through which to easily and effectively accomplish that.”

Castillo de San Diego is produced from the Palomino Fino grape and was first bottled commercially by Barbadillo in 1975. It is currently the most widely-sold white wine in Spain.

“The ‘Dando en el Blanco’ campaign featuring Castillo de San Diego illustrates a compelling use case for NFC mobile marketing – not just in the wine and spirits industry but with other consumer products as well,” said Davor Sutija, CEO of Thinfilm. “Barbadillo is a thought leader in this regard. We are pleased the Versos 1891 project was successful, and are now excited to bring our solution to Spain’s best-selling white wine.”