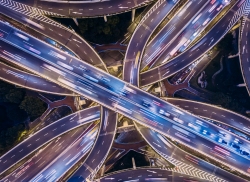 Connected cars are set to become a huge industry over the new few years; estimates of the number connected cars that will to be on the roads by 2020 vary from 250 million to 381 million, and research by the Global Mobile Suppliers Association points to that number increasing to 527 million by 2025.

Within and alongside the rise in the connected car is the introduction of autonomous cars – estimated to be introduced in 2021, 20 million are projected to be on the roads by 2035. Amongst other difficulties that they pose, once introduced, both connected cars and autonomous cars are going to be huge consumers of data, and improvements on current technology is going to be necessary.

A connected car is as it sounds: a vehicle connected to everything around it, with all the functionality that encompasses, from media and entertainment, to safety and navigation. Currently, the majority of this connectivity comes from being tethered to a smartphone, but increasingly cars are becoming connected in their own right, with communication technology embedded within the vehicle, says James Holland, trainee solicitor at Gowling WLG.

Examples of this connectivity are almost endless: currently media, entertainment and navigation are prominent features of the connected vehicle with Android Auto and Apple CarPlay replacing traditional car entertainment systems, and music providers such as Spotify being built into more cars. Once cars become driverless, desire for media consumption when travelling will rise, as cars become entertainment centres instead of driving machines.

The ability of connected cars extends much further than this, however. The desired connectivity is described by the 5G Automotive Association as ‘V2X’ (vehicle-to-everything). This includes vehicles speaking directly to each other, to infrastructure and to pedestrians, as well as uploading data to the network.

Vehicles will speak to each other and to the infrastructure on the roads, to, amongst other things, plan routes to avoid disruption, to change traffic lights based on traffic flow, and to identify free parking spaces. Data will be sent to the cloud, where manufacturers can check on the state of the car, and insurers can assess how the car has been driven to determine premiums.

This huge increase in connected devices requires a superior network to manage it, in overall speed, capacity and in latency. In these areas, 5G is set to make a significant improvement over current 4G LTE standards, with speeds increasing from 300 Mbits per second to 10 Gbits per second, latency shrinking down to 1 millisecond, and, crucially, sufficient bandwidth to allow the billions of smart devices to communicate.

Once cars move beyond being connected to being fully autonomous, the need for 5G technology will be increased further: prototype autonomous cars currently produce up to 2 gigabytes of data per second to operate safely, but even beyond this, when autonomous vehicles are initially released, it is unlikely that they will at first be able to cope with every situation – for example, where cars are being diverted around road works or obstacles by a human worker.

In an autonomous car, the ‘driver’ may not be alert to these scenarios, and as a result, Nissan have proposed a system where remote drivers would take over control of the vehicle. This process – having control of heavy machinery remotely, would clearly rely heavily on the speed of the internet to be effective, and extremely low levels of latency would be needed to ensure that the control of the vehicle is safe.

These advancements in the technology and vehicles interact could also well have legal ramifications in the form of a new patent war. Telecommunications has historically been a heavily litigious area, but litigation in the smartphone industry has started to become less common as many of the major players now have licences. The introduction of new players, such as car manufacturers, into the telecommunications field, could well restart some of the disputes in this area.

The author of this blog is James Holland, trainee solicitor at Gowling WLG