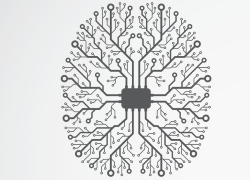 Many of the early artificial intelligence (AI) gains will be made in number crunching and pattern analysis, more machine learning and analytics than true AI. We’ve already seen some good examples of this in the healthcare sector, particularly in cancer research and diagnosis but where we will see a wider, perhaps more dramatic impact is in the Internet of Things (IoT), particularly within industry, writes Marc Ambasna-Jones.

The idea of smart machines communicating with each other is not new of course. We’ve had machine-to-machine (M2M) communication since the 1970s, if not earlier, but the emergence of AI will rip up every rulebook that went before it. IoT, while revolutionary in its own sense is not totally complete without AI. It still demands considerable human involvement, particularly in data analytics and visualisation but also in the interpretation of the data.

“One day the AIs are going to look back on us the same way we look at fossil skeletons on the plains of Africa,” said Nathan Bateman, a lead character in the 2014 AI-inspired movie Ex Machina. When we talk about AI, unfortunately this tends to be the perception; a Hollywood-fuelled image of spooky humanoids that want to take over the world. While this may be a bit far-fetched – although the likes of Professor Stephen Hawking are convinced it could become a reality if we are not careful – there is one truth in the film that is relevant today. AI, even in its infancy has the ability to change the way we work and live.

“As AI continues to evolve, the benefits for businesses will be transformational,” says a recent PwC report entitled ‘Leveraging the upcoming disruptions from AI and IoT’. “Given the power and scalability of AI solutions, tasks that used to take humans weeks or months to complete will be actionable in minutes or seconds.”

AI, adds the report, will enable the full promise of IoT but we are a long way from making this a reality. In truth, AI is still operating along repetitive task lines, with traditional applications and not in live and fast changing situations. Of course, this will change but not every sector is equal. Some sectors will evolve more quickly driven as much by demand as capability.

Looking at the IoT sector as it stands today, by far the most ubiquitous use of IoT is in monitoring of assets. According to some recent research from Inmarsat, which surveyed 500 senior respondents from organisations of over 1,000 employees, this is primarily in agriculture and transport, with the energy and mining sectors not far behind. How far AI impacts these sectors further will depend on how augmented intelligence will actually improve the results, whether there are sufficient skills and whether technology investors believe there is sufficient return on investment (ROI) to make development worthwhile.

For example, as it stands machinery is benefiting most from the data analytics currently offered through assisted intelligence – the first level of AI in IoT. Understanding performance of machines, obtaining predictive analytics on parts and potential issues is already having a significant impact on the field services industry, for example. This level of intelligence is fuelling demand.

According to the Inmarsat research, 97% of respondents claim they are experiencing, or expect to experience, significant benefits from the deployment of IoT technologies. The study also revealed that machine learning (38%), robotics (35%), and 3D printing (31%) were key requirements for effectively delivering digital transformation for business.

Interestingly another report – Spiceworks’ ‘Future of IT: Hype v Reality’ – points to the type of organisations and sectors willing to get involved early. Professional services, non-profit organisations and healthcare industries, says the report, have the highest planned adoption of AI (30% each). But for what? It doesn’t sound like there’s a lot of IoT going on here.

Clearly business analytics is driving interest for the moment but in IoT it is the addition of automated intelligence to any dumb ‘thing’ that will be the real game changer. So, what will AI in IoT look like and do we have the skills to really make it happen?

If you think of it as automated intelligence, it is exactly what Elon Musk is trying to do with his Tesla cars. The autonomous vehicle ideal is an example of where AI is going. To create a machine that can learn quickly from varying situations and make a judgement, automatically, without human intervention. In IoT it is the ability to shift from prescriptive analytics where relevant questions are posed from analysing all the data – and answered by humans – to adaptive analytics, where questions are continuously posed and answered by the machine.

Bhoopathi Rapolu, head of analytics, EMEA at engineering firm Cyient says this sort of scenario is ideal for the rail industry where complex maintenance schedules and support services need optimising. “The key promise of an AI engine is that it can capture and encode valuable domain/expert knowledge of engineering works, as well as safety requirements and guidelines, to automatically optimise how track possessions, engineering trains and personnel resources are assigned to various engineering works,” he says.

Adding intelligence to the sea of data already being captured from sensors makes sense and Rapolu is right to attach so much importance to it, after all industry is attracted by the potential for cost savings and improved product and service efficiency. However, to have any chance of reaching this goal there are still some considerable challenges that need to be addressed.

Skills shortages (certainly for those familiar with machine learning and data science) and privacy concerns will need to be addressed. Cyber security too, although the IoT industry is already seeing AI as a key tool in improving security. The IoT Security Foundation has been discussing the issue for some time, particularly in relation to consumer devices, the subject of recent breaches and concerns.

The challenges however are not insurmountable especially when weighed against the potential benefits. As well as reduced costs and improved efficiencies, we should see higher revenues from improved products and services, increased reliability, smarter and safer machines and devices, reduced accidents and errors and improved customer experiences. In every sense, AI will be the ultimate disruptor. It’s just a matter of time.