What is artificial intelligence and why does it matter, apart from the love and sex? - IoT Now News - How to run an IoT enabled business


Home › Artificial Intelligence › What is artificial intelligence and why does it matter, apart from the love and sex? 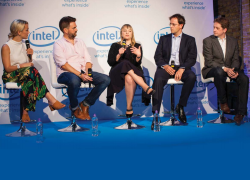 Artificial intelligence (AI) is defined by one dictionary* as an area of computer science that deals with giving machines the ability to seem like they have human intelligence. AI has been portrayed in films, books and TV as a threat to human control of the planet. And it matters, says Jeremy Cowan, because AI has moved from science fiction to fact – the technology is being deployed now in areas like cyber and physical security, and soon in transport, energy, medicine and space travel … oh, and sex.

Chip-maker Intel recently brought together a panel of experts in the vaults of London’s Tower Bridge to ask if AI and humans can live together happily ever after.

Georgie Barrat, presenter of British TV’s Gadget Show asked Dr. Sabine Hauert of the UK’s University of Bristol and a member of the Royal Society Machine Learning working group, how AI might benefit humans. Hauert’s reply was simple, “1.25 million people die on the world’s roads each year.” By enabling autonomous vehicles to drive instead, she believed fewer people will die and we can be greener.

The University of Birmingham’s Jeremy Wyatt, professor of robotics and AI, acknowledged that people come to the subject with questions such as, ‘When is the robot going to take my job?’

So how should AI’s backers counteract these negative narratives?

The answer, he said, is through real world experiences and by explaining what’s underneath AI’s covers. “Automation has always changed the way people work.”

Sam Vincent, co-creator, writer and producer of the TV series HUMANS, said: “Automation has been in process for 20 years since people smashed looms because they were taking jobs.”

Asked by Barrat if Hollywood and other media are to blame for the public’s preconceptions about AI and machine learning (ML), Chris Feltham, industry technical specialist at Intel, conceded: “Yes, if that’s your only experience. Being wary is fine, but being afraid is not.”

A million miles from AI chat

Wyatt was asked if the science is ready for us to have normal conversations with robots. “We’re a million miles away from that,” he said. “But we’re now better at building task-specific robots, robots that are very good at that task but rubbish at anything else. The way to think about AI is that every robot will have a small task. It will be like the rainforest where every animal is able to do one thing very well. AI will lead to machines that are very good at specific things.”

“Are there any good examples of AI in use now?” Barrat wondered.

Intel’s Feltham said the public was aware that there’s an intelligence in Netflix or our Amazon recommendations. He and Hauert cited the example of a US charity, the National Centre for Missing & Exploited Children (www.missingkids.com ), an agency for finding and protecting lost kids. It has 25 analysts who examine no fewer than eight million leads and clues annually. It has been taking skilled analyst teams up to 30 days to see if there’s enough information to warrant further investigation of a missing child. Now, using artificial intelligence to replicate and accelerate human analysis, the analysis time has reportedly been cut from 30 days to one day, with obvious benefits for investigators trying to locate the children.

Sabine Hauert told the audience that AI is making sense of a lot of data far better than we humans can. It was a point echoed by Sam Vincent when asked what the exciting trends are in AI. “It’s the implications for big data,” he said, “when the global economy can be looked at and AI can offer proposals on vast intractable problems with vast data sets.” The hope is that AI can help reduce poverty and hunger.

It’s sex too, but not as we know it

“Will people fall in love with AI?” asked Barrat. “Will there be love and sex robots?”

Prof Wyatt had no doubt. “Yes, absolutely. That will happen. The human tendency to anthropomorphise is incredible. After all, a woman once married a piece of the Berlin Wall! Certain interactions are addictive, just think of Tamagotchi.”

Asked for three things about AI for us to get excited about, Wyatt said it would be “fantastic to find other things for us all to do when AI has taken over” some of our jobs. “Second, I want a Babel fish in my ear. In 10-15 years, machine learning and translation mean it’ll be possible to do live translations in a moderately noisy environment. And in the future, robots will be proxies; we’ll send them to far solar systems and bring back useful information long after the people who sent them have died.”