IoT impacting IT infrastructure from edge to the cloud, says 451 Research - IoT Now News - How to run an IoT enabled business

451 Research unveiled the latest trends in IoT use and finds that the massive amounts of data generated by the Internet of Things (IoT) is already having a significant impact on enterprise IT. Please let me know if you are interested in speaking with an analyst regarding the survey results below.

In the latest Voice of the Enterprise: IoT – Workloads and Key Projects, analysts find that organisations deploying IoT are planning increases in storage capacity (32.4%), network edge equipment (30.2%), server infrastructure (29.4%) and off-premises cloud infrastructure (27.2%) in the next 12 months, to help manage the IoT data storm.

451’s analysts find that spending on IoT projects remains solid, with 65.6% of respondents planning to increase their spending in the next 12 months and only 2.7% planning a reduction.

Today, IT-centric projects are the dominant IoT use cases, particularly datacenter management and surveillance and security monitoring. Two years out, however, facilities automation will likely be the most popular use case, and line-of-business-centric supply chain management is expected to jump from number 6 to number three. 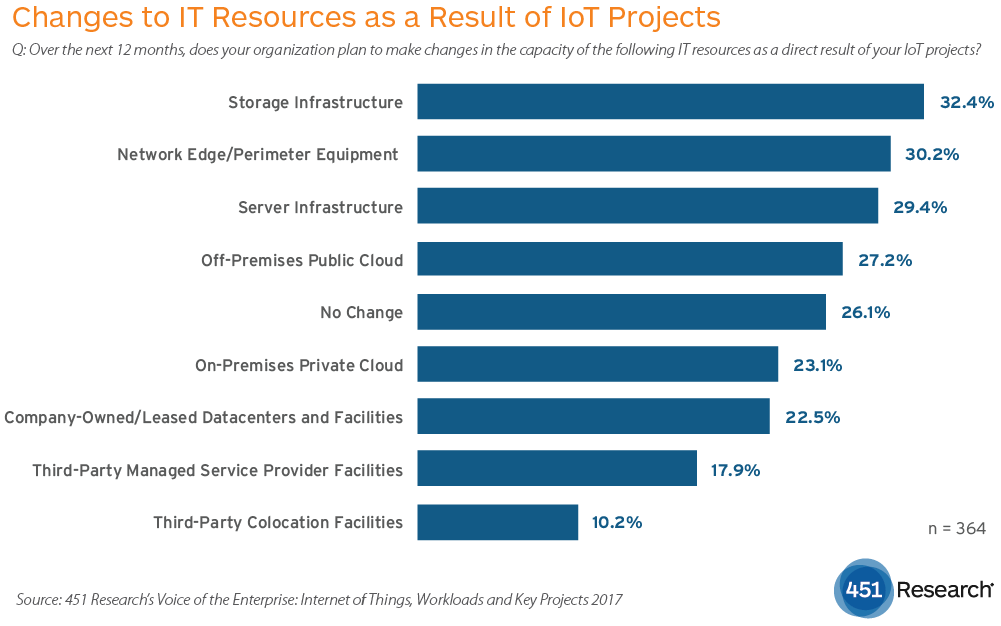 Finding IoT-skilled workers remains a challenge since the last IoT survey in 2016, with almost half of respondents saying they face a skills shortage for IoT-related tasks. Data analytics, security and virtual­isation capabilities are the skills most in demand.

451 Research reports that the collection, storage, transport and analysis of IoT data is impacting all aspects of IT infrastructure.  Most companies say they initially store (53.1%) and analyse (59.1%) IoT data at a company-owned datacentre. IoT data remains stored there for two-thirds of organisations, while nearly one-third of the respondents move the data to a public cloud.

Researchers also find that, once IoT data moves beyond operational and real-time uses and the focus is on historical use cases such as regulatory reporting and trend analysis, cloud storage gives organisations greater flexibility and often significant cost savings for the long term.

Despite this centralisation of IoT data, the survey also finds action at the edge. Just under half of respondents say they do IoT data processing – including data analysis, data aggregation or data filtering – at the edge, either on the IoT device (22.2%) or in nearby IT infrastructure (23.3%).

“While some enterprises say that in the future they will do more analytics – including heavy data processing and analysis driven by big data or AI – at the network edge, for now that deeper analysis is happening in company-owned datacenters or in the public cloud.”