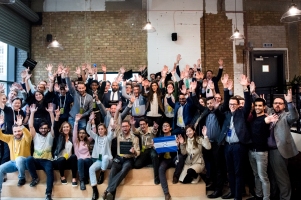 Startupbootcamp IoT announced the nine startups selected to join the second cohort of its London-based accelerator program kicking off in October. These nine startups, from all around the world, are developing Internet of Things (IoT) devices that tackle problems in diverse applications from factory automation and smart farming to driver safety and cybersecurity.

Back in April Startupbootcamp IoT opened applications with a particular call out to Industrial IoT, B2B and high-impact startups in areas such as manufacturing, infrastructure, energy, education, the environment, health, agriculture and retail.

This was a response to trends highlighting a growing investment in the Industrial IoT space and waning support for smart home products and consumer IoT devices. As a result nearly 75% of the applications received were from startups working on B2B IoT devices, compared with just 24% in 2016.

Program CEO and founder, Raph Crouan, said: “We’ve begun to see a real shift in how investors, partners and customers are viewing the IoT. These audiences recognise the clear benefits the IoT brings but are bored of the deluge of useless connected products built in the past five years. With a few notable exceptions, last year’s inaugural IoT cohort was dominated by home and consumer-level products, but this year it’s been the reverse.

We’ve witnessed a real shift in those innovations attacking the needs of heavy industries such as manufacturing, logistics, agriculture, etc., or using IoT in high-impact areas such as the environment, sustainability and societal problems in general.”

“Our experience seems to mirror what’s happening on a global level, where those startups bringing IoT innovation to heavy industries — through innovation in areas such as sensors, security, cloud platforms, networking infrastructure, machine learning, AI, robotics and data analytics — are receiving a greater share of the investment going on in the IoT ecosystem.”

“Here at Startupbootcamp IoT we’re aiming to make the journey of building a connected hardware startup clearer, shorter, and more successful for entrepreneurs. The team can’t wait to start helping this year’s exciting cohort to realise their goals and bring their IoT innovations to market. Narrowing down our final startups was very difficult given the exceptionally high calibre of the applicants but the nine we’ve chosen have huge potential in such a diverse set of applications.”

After receiving, and reviewing, applications from over 350 startups from 57 countries, 18 finalists were invited to attend Startupbootcamp Selection Days between September 13-15th. The final nine to join the program were chosen following an intense three-day selection process that included expert workshops, pitches to program partners such as Cisco and Premier Farnell, and mentor feedback sessions.

The 2017 Startupbootcamp IoT cohort is:

Now in its second year of running the program, Startupbootcamp IoT’s program will give the nine startups access to a global network of business mentors, hardware professionals, corporate partners including Cisco and UCL, potential customers, and investors. With workshops, one-to-one sessions and events, each startup is able to call upon daily support from the Startupbootcamp team on areas including business development, finance and marketing.

The report author is Ben Hayes, CMO at Startupbootcamp IoT