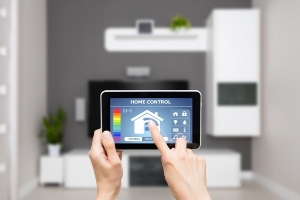 Smart home devices are shaking off their novelty image and moving mainstream to become one of the fastest growing consumer electronics categories of 2017. That’s according to a new smart home report from Futuresource Consulting, which reveals that the devices will achieve a retail value of $6 billion (€5.11 billion) worldwide this year, with revenues expected to triple by 2021.

“The smart home has arrived and its impact is indisputable,” says Filipe Oliveira, a market analyst at Futuresource Consulting. “Smart home devices help with daily tasks, improve security and generate savings in energy bills through heating and lighting control. With high profile brands like Samsung, Apple and Philips getting in on the action, consumers are becoming attuned to the benefits, excited by the possibilities and are beginning to flex their purchasing muscle.”

Alexa and the Google Assistant, embedded in a range of devices, are making inroads into smart home control, with Apple’s Siri and Microsoft’s Cortana currently lagging behind in the smart home. However, the success of smart speakers and the intuitive nature of voice is not toppling the ever-present nature of smartphones, which are still the go-to interface for controlling smart home devices.

“Consumers carry their smartphones everywhere they go, even when moving from room to room around the home,” says Oliveira. “Smartphones currently have the edge on smart speakers, because these devices allow face recognition and gesture commands to play a role alongside voice commands. Voice may not be needed at all in many smart home situations; when the user is away from a microphone, when there is background noise or when multiple people are talking in the same room, for example.”

Watch this space for combined voice and sensor control embedded into your smart refrigerator, wall art, mirrors, set-top boxes and TVs, any of which could become the means by which users give commands to their smart home.

“Security and monitoring products are leading the smart home charge. With the highest penetration rates and the largest value and volume at retail, this category is one of the main drivers of growth,” says Oliveira.

“In terms of market development, we’re seeing a surge in lighting, which is picking up speed faster than all other categories in retail and through the custom installer channel. Although we expect a general decline in unit prices, the lighting category will reinvent itself, with the emergence of products that combine lighting with other functions such as speakers and cameras, adding both value and appeal to the category.”

An increasing consumer appetite for all things smart home is giving rise to a range of other smart home devices beyond the four main categories. This includes an assortment of devices from smart mirrors to smart fragrance diffusers, but also basic smart home items such as connected sockets.

At present, North America represents over 60% of global smart home shipments and will continue to take the lion’s share out to 2021 and beyond. In Europe, the UK is playing a starring role in the smart home revolution. With a smaller population than both Germany and France, the UK outstrips them as the biggest market for smart home products in Western Europe. Looking to the Asia Pacific region, South Korea is leading the way and growing fast, due to a combination of home grown CE brands and an early adopter mindset.

The Middle East and Africa are behind the smart home curve, although the region is experiencing pockets of innovation and a number of market opportunities, which are covered in more detail in the Futuresource report.

In channel terms, retailers and service providers are the main contributors to the smart home device market. Custom installers currently account for less than 20% of installations and most of the growth is coming from easy-to-install DIY devices.

“Over the coming months and years, the CE winners will be those who place the smart home at the heart of their business planning,” says Oliveira. “In addition to providing smart home devices, vendors can benefit from selling a wide range of related services and complementary products, as well as using the connected home to cement ties with their customers.”