The Internet of Things continues to expand rapidly, and the smart home will be one of the keys to further growth through the 2020’s, according to new research from Strategy Analytics.

The report, Connected World: Smart Home Is Key To Tomorrow’s Internet of Things, found that nearly 20 billion IoT and connected devices will be deployed worldwide by the end of this year, and a further 10 billion will be added over the next four years.

Enterprise IoT has been the key sector in recent years but longer term projections suggest that the smart home is likely to become a major generator of connected and IoT device deployment growth during the 2020’s, taking the total figure towards 50 billion.

Other key findings from the research include:

“The original connected device, the PC, now represents only 5% of the total market, which illustrates how the internet has permeated so many aspects of our lives,” says David Mercer, principal analyst and the report’s author. 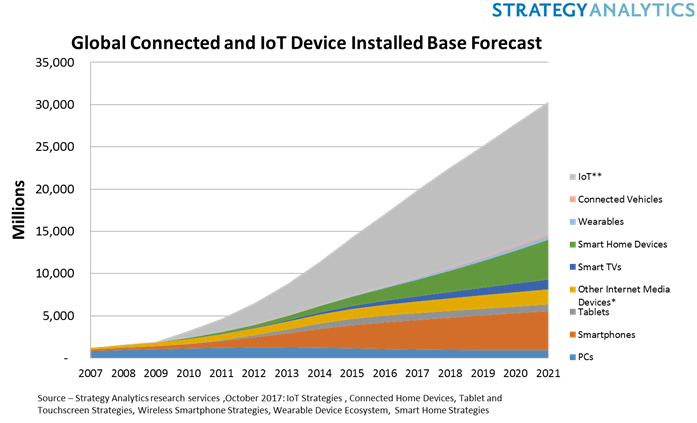 “The smart home is only at the beginning of its evolution, and as homes install increasing numbers of connected devices it is set to become one of the largest segments in the wider Internet of Things over the coming decade,” comments Bill Ablondi, director, Smart Home Strategies.