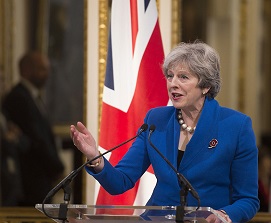 UK Prime Minister, Theresa May today announced a new £20 million (€22.3 million) fund to help public services use UK expertise in innovative technologies like Artificial Intelligence (AI). Investment in the sector is always welcome and who knows, says Jeremy Cowan, it could take Mrs May’s mind off Brexit for a while.

Earlier, the Prime Minister met leading digital entrepreneurs and innovators from across the UK, as she announced a series of measures to support the “continued growth and success” of the country’s tech sector. There was plenty of talk of being world class and of the Government’s “enduring commitment” to this vital industry.

The PM and Britain’s Chancellor of the Exchequer, Philip Hammond announced a wide-ranging package of support which includes:

Mrs May said: “It is absolutely right that this dynamic sector, which makes such an immense contribution to our economic life and to our society, has the full backing of Government. Technology is at the heart of our modern Industrial Strategy, and we will continue to invest in the best new innovations and ideas, in the brightest and best talent, and in revolutionary digital infrastructure.

“And as we prepare to leave the European Union, I am clear that Britain will remain open for business,” she added.

The new funding for Tech Nation will see the organisation expand its hub model to more cities around the country, including Belfast, Cardiff, Edinburgh and Birmingham. Building on the work of existing regional clusters, Tech Nation will support 40,000 entrepreneurs and up to 4,000 start-up companies.

The new ‘GovTech’ challenge fund will encourage UK firms to use technology to solve challenges facing the public sector, while a dedicated new team will act as a front door into Whitehall to connect tech companies to the right parts of Government.

Following months of lobbying by industry bodies and alternative broadband providers frustrated at Openreach‘s slow and patchy broadband roll-out, the government reports that “a new £2 million (€2.23 million) pilot voucher scheme” is also being launched in six areas. This is part of the administration’s pledge to bring “the UK’s fastest and most reliable broadband to homes and businesses across the country”. Local companies will be among those offered vouchers by broadband suppliers to pay for what are described as “gold-standard full-fibre gigabit connections”.

And there are just days left for students to apply for a new apprenticeship and university bursary worth £4,000 (€4,460) a year, being offered by the National Cyber Security Centre as part of the UK government’s investment in the next generation of cyber security specialists, digital entrepreneurs and tech innovators.

Commenting on the announcement, Sherry Coutu, chair of Founders4Schools and The Scaleup Institute said: “The digital tech sector is a key component of the UK’s competitive advantage and these new measures are welcome news for innovative small and medium-sized businesses and third sector organisations by helping to create the conditions in which they can scale up.”

Eileen Burbidge, Chair of Tech City UK, added: “We are delighted to hear that the Government wants to increase Tech City UK’s funding for the next four years. Under the Tech Nation banner, this country that has brought so much innovation to the world and leads in sub-sectors such as fintech, cybersecurity, artificial intelligence, robotics and life sciences, will build a national network of digital excellence so that the UK will continue to be recognised as one of the best places in the world to start or grow a digital tech business.”

Beecham Research‘s CEO, Robin Duke-Woolley, told IoT Now, “While this initiative is most welcome, we should consider that the British tech sector is something of a feeding ground for the larger tech companies, particularly those based in the US. There is no doubt that British tech is hugely innovative and there is a lot of talent that these initiatives help bring forward, but the thinking really needs to go further to help create more national tech champions that stay based in the UK.”

Attendees at the roundtable included: