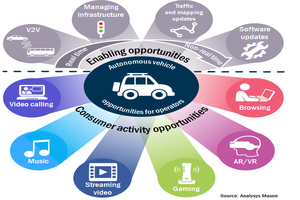 While autonomous vehicles are gaining huge attention from all sectors, there is little assessment of what they mean for the telecoms sector. Based on a series of discussions with players in different roles in the value chain, and our own analysis, Analysys Mason believes that, while autonomous vehicles may have a transformative impact on society, their impact on the telecoms industry is likely to be modest, says Tom Rebbeck, research director, enterprise & IoT at Analysys Mason.

Autonomous vehicles are unlikely to rely on telecoms networks, despite the often-made association between 5G and autonomous driving: self-driving cars will depend more on on-board processing than the cloud. Real-time connectivity will be beneficial, but not essential.

Telecoms networks will be used for non-real-time updates to and from the vehicle (such as traffic information, mapping information and software updates), but bandwidth requirements for these services may be (relatively) low.

However, autonomous motoring will turn drivers into passengers, and potentially into consumers of video, gaming and audio content – all of which could generate new demand for telecoms operators’ services. The time frames for these developments this will be long: fully autonomous vehicles may not form the majority of vehicles until after 2030, depending on technology developments, regulation and consumer acceptance.

Self-driving vehicles rely on information coming from their on-board sensors (for example, radar, lidar, optical) to navigate because cellular services cannot always be guaranteed to be reliable. Information from a wide-area connection will help supplement the on-board data, perhaps giving additional information about the actions and intentions of other vehicles, but the vehicle will never be dependent on that information.

This is essentially the way that experimental autonomous cars are working today – information from on-board sensors is combined with highly detailed (up to 10cm) maps. These maps can be updated, in non-real time, using a cellular connection (or via a Wi-Fi connection and fixed broadband).

Developments in ‘vehicle-to-everything’ (V2X) technology will not change this. The information available to the autonomous car will become richer, but will only act as a supplement to on-board systems. V2X could have other impacts though: unlike today’s experimental autonomous cars, which each act as an isolated unit, V2X technology could allow different vehicles to act in concert – for example allowing vehicle platooning or smoother traffic flows in cities.

Bandwidth requirements are hard to calculate, but may be (relatively) low

Intel created some interest by suggesting that autonomous cars will generate 4TB of data per day. However, this figure needs to be treated carefully. Based on the inputs provided by Intel, it seems this figure is based on a car driving for at least 15 hours a day – reasonable for the average self-driving Uber perhaps, but unlikely for a typical private car.

Intel’s 4TB figure must also be treated with caution because it is the amount of data that needs to be processed, not the volume of data that will be uploaded to the cloud. Most of the information processed by the vehicle will likely be immediately discarded – if the car ‘sees’ what it is expecting to, and navigates without incident, little of the data needs to be retained and only anomalies will be shared with the network.

Assuming a car is driven (or, more accurately, drives) for an hour a day, the car could generate as little as 250MB if only 0.1% of the data processed locally needs to be uploaded. The 0.1% figure could be too low, but illustrates that we should not assume that autonomous cars will, by their nature, generate massive quantities of data for telecoms operators. In any case, as only anomalous data will be uploaded, it will likely only be a tiny fraction of the total data processed.

Autonomous driving will change how we spend time in the car. Former drivers will have more time available than before, and this could generate opportunity for telecoms operators – for streaming video, audio, or even augmented reality games that mix the passing environment with game play, such as racing other cars.

Again, the exact impact of all of this is difficult to estimate, but could be well over 1GB for 30 minutes of video streaming. This could be addressed either by adding a vehicle’s existing connection to a data plan, through tethering smartphones or through in-car Wi-Fi hotspots that use a car’s OBD-II port. While there will be some opportunity to provide connectivity for cars to self-drive, both from providing the bandwidth and any new infrastructure that could be needed by V2X, entertaining the passengers could be the larger opportunity.

Development timescales are likely to be long

All of this will take a long time to develop and deploy. Full autonomy is unlikely to be available before well into the next decade. Assuming that autonomous cars replace traditional cars at a similar replacement rate that we see today (with around 7% of cars replaced each year), it may be 2035 until half the cars on the road are autonomous.

It could happen quicker – for example, through retrofitting vehicles with autonomous capabilities, through legislation that encourages autonomy (or even bans driving), or through autonomous cars replacing multiple traditional cars. All these are possible, but it would be a bold assumption to expect many autonomous cars ahead of 2025.

The telecoms industry may be well advanced with 6G before autonomous cars have a major impact.

The author of this blog is Tom Rebbeck research director, enterprise & IoT at Analysys Mason.