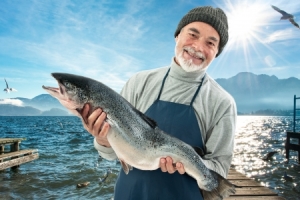 Robots may work in teams, but their personalities can be like chalk and cheese, says Internet of Things (IoT) writer and observer, Nick Booth. Take the Scandinavian robotic cops that are cleaning up the killers on Norway’s fish farms.

With an output of 80 million tons of fish a year, aquaculture is the world’s fastest-growing food producing sector. It has tripled in 20 years and now provides 17% of the world’s animal protein.

But the waste is growing too. Fish in confinement are more prone to pestilence and disease. With 1,200 farms, Norway is the world’s second biggest fish farm producer – and it’s losing €310 million salmon killed every year.

The sea louse doesn’t look much but it will eat a salmon’s skin and blood and leave open wounds. Two robots can stop the killings but they have two distinct styles. One fights dirty, the other is clean.

Stingray takes the no-nonsense approach one would expect from a product of a capital city. The Oslo-bred robot shoots the killers with a laser gun. It’s an unconventional approach, but it gets results. And it has the full backing of its captain, Esben Beck, who learned his trade the hard way, in Norway’s oil industry.

As a form of pest control it sounds a bit laborious, not to mention dangerous. Shooting a fly-sized target off a moving fish sounds about as efficient as chasing a fox through fields with a pack of dogs.

But the technology is already there. In the 1990s Americans worked out how to laser a cruise missile from five miles, explains Beck. That’s a much higher precision than Stingray needs to shoot lice.

The laser is enclosed in a watertight ‘punch bag’, which contains a camera that spots the parasites on fish. Once a louse has been sighted an onboard computer calculates the laser’s trajectory.

Another camera provides a live-feed of the action to the Oslo control room. As fish swim by, lice are detected and within milliseconds a laser beam, comprising photons of energy, heads towards the lice and the energy coagulates them to death. Each louse-kill is documented in a photo, which is displayed as a composite in the control room, like a sort of virtual trophy wall.

No salmon are harmed by the laser as their shiny shells deflect the lethal lights. So far, the lasers have treated millions of fish, and fish farmers have reported no injuries.

Salmon farming in Norway uses an open net system, which means parasites can float freely between the wild environment and the cage that the farmed salmon is in.

Killed with a Halo

A more long-term solution is offered by the Halo Robot, which operates from the more rural surroundings of the Aqua Robotics HQ. This louse buster has a completely different MO (modus operandi) which is much more patient.

Lasers are tough on lice. The Halo tackles the causes of lice. Halo’s robots lay down the law by constantly scrubbing away at the infrastructure to remove any horrible stuff from lousing up the infrastructure. To paraphrase Travis Bickle, the vigilante anti-hero of cult movie Taxi Driver: “Grease, algae, mussels, hydroids, bacteria, Lice … some day a real brush will come along and wash this trash off the side walls.”

Unlike the trigger happy laser, The Halo Robot isn’t a maverick. It does everything by the roster, which is strictly controlled by a series of robots connected by 4G and Wi-Fi connection and managed by Halo-Track.

Halo-Cleaners are the brush units and they work to rule within the confines of the PE pipe, which works in tandem with ropes, hoses and wires which are all robotically controlled by the Halo Track. As a result, all parts of the fish farm get at least one brush a day. Some even get four.

The bottomline result is that lice are under control, there is better water and oxygen quality for the fish, and disease is managed. Less energy is consumed and, by shunning industrial cleaning methods, the salmon are subjected to less traumatic noise.

This automation could cut overall running costs by 7%, says the company. Higher standards of cleanliness will, in turn, create improvements in salmon yields. Obviously, since this is a new technology, it’s too early to quantify those.

Still, those lousy parasites that slip through the net will get to eat photons when the Stingray cop lasers them. Who knew robotic fish farming would be so dramatic?