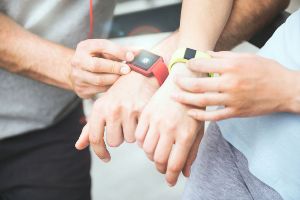 The latest quarterly worldwide wearables market report is now available from Futuresource. It highlights game-changing dynamics across this market landscape, which shipped 24.3 million devices in Q1 2018, generating a total market retail value of US$4.4 billion.

“In Q1 2018, smart and hybrid watches drove the overall growth of the wearables market. 2017 was dominated by Apple. However, during 2018 the smartwatch market will become more fragmented,” commented James Manning Smith, research analyst at Futuresource Consulting.

“Fragmentation reinvigorates competition and creates both challenges and opportunities for the year and beyond. Futuresource is seeing smartwatch brands’ product planning teams fine-tuning their product and promotional plans to capture share of the market, which is predicted to be worth US$12.1 billion this year.”

During 2017, some traditional watch vendors, such as Fossil, have shifted focus to smartwatches, modernising their portfolio for the IoT age. Now the well-known wearables brand, Fitbit, is gaining a strong position in the market, announcing sales of one million Fitbit Versa smartwatches since its launch in late Q1 2018.

These brands are looking to take on Apple, which has grown its wearables business significantly over the last three years, claiming over 60% of the connected watch market during 2017. The market is expected to become more complex in 2018, with new entrants and watch makers starting to take a slice of new market growth.

While Futuresource believes in the long term that smartwatches will become the dominant wrist-worn wearable, a US$6 billion market still exists for dedicated fitness devices in 2018. However, remaining competitive in this market against smartwatches will become more difficult. Fitbit’s most recent announcement in this space attempts to target a previously untouched segment for the brand.

The Fitbit Ace for Kids is promoted as an activity tracker, encouraging fitness, collaboration and health awareness. According to Futuresource, “The launch of the Fitbit Ace is a smart marketing tactic; it provides access to a new market demographic, hoping to leverage additional sales from parents in the existing Fitbit base,” added Manning Smith.

2018 looks set to be one of the most positive years in the wearables segment, with much more of a steady trend towards high-end wearable products than ever before.