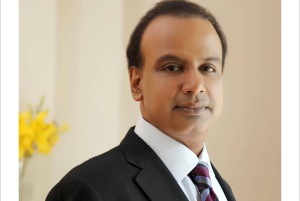 As a child what job did you want?

Believe it or not, I wanted to join the Army.  My father was something of a hero to me and had a distinguished military career. I still own his service watch.

So, what was your first job?

My career began as an analyst at the World Bank around 1986. Back then I was working on the concept of the “Information Utility” which in fact was a precursor to the Internet. I consider this assignment to have been something of a lucky break, because even back then the power of technology to radically change economic development quickly became very apparent to me while I was working on the project.

Without naming and shaming, tell us about your worst boss

Early in my career I had one boss who was not very culturally sensitive, never developing the necessary empathy and understanding with customers – or indeed colleagues – from different backgrounds, countries or cultures.  I saw with my own eyes how much of a major handicap that can be for any company serving customers worldwide.

Which IoT use case has recently fired your imagination?

The IoT space is not short of interesting use cases, many of which have the power to inspire the imagination. What the space lacks in my mind is a generic API that can connect and fingerprint all devices. It needs that to deliver the scale and speed deployment and to fire even more innovative and imaginative use cases.

What life lesson would you share with your younger self?

Never give up, never stop striving to get the most out of any situation or opportunity, and always have a clear plan. I love start-ups and have been involved in three; each time we had a clear exit strategy and each time we delivered that successfully. This wouldn’t have been possible without a bit of tenacity.

What has been you most memorable business travel experience?

In the late 1980s I lived and worked in China helping to set up a hardware manufacturing joint venture for Apollo Computers – an operation which was later acquired by Hewlett-Packard. These were still relatively early days in China’s emergence as a major world economy – and also the beginnings of the country becoming a powerhouse in high quality IT manufacturing. It was a fascinating time to be in China. The manufacturing label ‘made in China’ had previously been associated in the Western World with cheap goods – now it was coming to signify ‘low-cost excellence’.

Tell us about the proudest moment in your career so far

I would say getting Audax to invest in Mobileum in 2016. As a private equity partner, Audax specialises in transforming established market companies into larger, better-positioned and more valuable businesses.  At the time of the investment they were, and they remain, the ideal partner for Mobileum. The support from Audax is enabling us to build a platform – both in technology terms and in market positioning terms – that will help us to consolidate our leading position in roaming and to continue to grow our analytics business.

Audax also introduced Mobileum to Arun Sarin, the former Vodafone Group CEO. Arun now shares his vast experience and insights with us as a board director. The backing of Audax also enabled us to increase our Merger & Acquisitions activity – as evidenced by the acquisition of Evolved Intelligence last November – a move which opens up complementary business opportunities for Mobileum in network security, taking advantage of the leadership position EI had established.