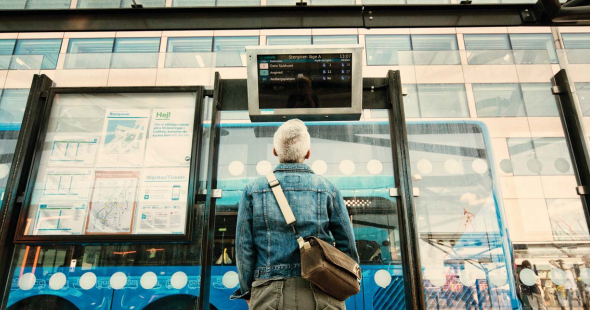 Sweden’s second largest public transportation company, Västtrafik, transports nearly one million passengers each day via train, tram, boat and bus – that’s equal to nearly 12 trips around the globe – and Tele2 IoT is the glue that helps keep it together.


Operating in both rural and urban areas of western Sweden, Västtrafik is the engine that keeps people moving, via 1,857 buses, 101 trains, 263 trams and 36 ferries.

“Almost one million people in the Västra Götaland region take public transport every day, and more than one million people use our travel app,” says Daniel Ulfhedder, manager of Telephone Communication at Västtrafik. “By connecting our entire ecosystem with IoT – which includes not just vehicles but also bus stops, information boards and the app – we are able to give real time information to our customers and are also able to act quickly when there is a problem.”

Västtrafik procures the vast majority of its fleet from sub-contractors, so having a unified transportation platform is vital to operations: Västtrafik is able to consolidate data from all public transport in the region, which allows it to optimise routes and plan the entire transport grid more efficiently. This, in turn, gives customers a unified view from one source, making their journeys easy to plan.

“We operate with public tax money,” explains Ulfhedder. “So, it’s critical that we use that money efficiently to provide consistent quality of service that meets the public’s needs. IoT helps us do this extremely well by giving us the information and data we need in order to respond quickly to immediate issues, such as needing to reroute a bus or amend a timetable. IoT also allows us to plan long-term to meet the changing needs of our customers.”

Connected computers are installed on 2,500 transport vehicles. Data is generated around the clock and several parts of the ecosystem communicate in real-time, such as buses sending information to bus stop electronic displays and the planning app, which gives passengers realtime information. Vehicle computers also measure other things, such as connecting the vehicle to the right route on its first run of the morning, measuring the time it arrives and departs, the distance covered, the number of trips made, and the number of tickets validated.

Vehicle connectivity also provides communication between the driver and Vasttrafik’s operations centre, where it is analysed. All of this contributes to valuable data, which is then used to optimise the public transport system.

All connected transportation vehicles and electronic displays used by Västtrafik are equipped with Tele2 IoT SIMs and managed via Cisco Jasper in order to ensure a complete over view of the connectivity, such as with the company’s 1,400 real-time electronic information signs. These signs allow Västtrafik to give customers up-to-the-minute information about things like delays, detours, and when the next bus, train, tram or ferry will arrive.

The company’s IoT journey began in early 2016 and Ulfhedder says that Tele2 IoT gave him the solution he wanted. “The Tele2 IoT local roaming solution makes sure the electronic signs are always connected to the best network in the area, which is of course important overall, but most particularly in more rural areas,” he says. “We’re a public company and we put out a public tender with a pricing formula that had very specific requirements – the more data we used the less we paid per gigabyte. Tele2 IoT was the only one who was able to deliver pricing based on our requirements.”

Ulfhedder says Tele2 IoT support has been excellent, both during the set up of Jasper and the rollout of connectivity. So, what does the future hold when it comes to public transport and connectivity?

“The future of course is green,” he adds. “We can already see green transport schemes implemented in Gothenburg, which ranked number one among sustainable and innovative cities in 2017. We’ve also launched Line 55, together with Volvo, which is an electric bus that can even make stops inside buildings.”

“IoT will continue to help us enhance customer experience by helping us deliver efficient traffic, which may be achieved by installing sensors in vehicles to monitor smoothness, and similar schemes,” Ulfhedder concludes. “We’re even testing autonomous vehicles in Lindholmen Science Park, where some of the most innovative companies in Sweden have offices.”