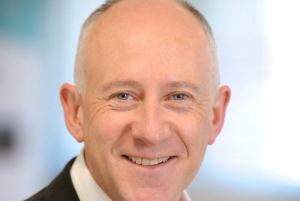 Richard Baker, CEO of GeoSpock tells IoT Now’s Jeremy Cowan about a diet of snakes and insects, plus the value of tenacity, fixing stuff and building a rapport in business.

From an early age until, I was around 18, I wanted to be a Catholic priest. I grew up in Ireland and had a very Catholic upbringing; I was an altar boy, quite religious, and even went to Lourdes a few times as a helper. All of that was a very big part of my life.

Then I wanted to be a pilot! This was driven in part by passion for taking stuff apart. I was taking sockets off walls at the age of seven and playing around with electronics. I used to collect old valve radios, disassemble them and then build antennas in the garden so I could tune into maritime and airline frequencies.

In the end, I went into the merchant navy and trained as a radio officer, a post I held until I was 21. So, if anyone ever needs to do Morse code, then I’m your man!

I still build all kinds of systems, and share this passion with my own children. I wired my own house, put in audio streaming technology, and am constantly take things apart and showing my kids how they work. I’m a big believer in fixing stuff.

I would probably tell myself that tenacity is the most important characteristic to develop. The ability to stick with things, and wake up every morning motivated to lead and change, should never be underestimated. It’s a critical skill, particularly when you’re building start-ups and scale ups. Don’t let ambition cloud the importance of tenacity, and of bringing energy to the build process.

I’ve been fortunate enough to work with some hard-working and dedicated people, so there’s no one individual I’d pinpoint. For me, it’s more a matter of management style; I think inconsistency in how someone engages with their employees can be a difficult trait to manage.

Veering between heaps of praise and angry outbursts isn’t a way of generating trust and belief in your team. If you really want to have a team that you motivate, and that you inspire to go on a journey with you, you can’t afford to transfer your frustrations onto them.

There are a lot! At the moment though, I’d probably go for IoT devices embedded within smart street lighting and urban furniture. These can enable so many new services and drive huge efficiencies in city environments, which will directly benefit public sector spending and citizens’ quality of life.

There are still a huge number and diversity of use cases to unfold from IoT smart city infrastructure. I love the fact that we’ve got connected cars under IoT control, and that we’re seeing a rise in maritime logistics tracking, for example. They deliver efficiencies to both business owners and the consumers of those supply chain goods.

I think the most significant benefit to society, though, will be the ability to monitor our environment, to run efficient, clean, green cities and to construct cities which place the citizen at their heart.

My most impactful memory was from about 25 years ago, when I was working in a telecoms manufacturing company and I was asked to go and set up operations in Guangdong province, China. I was placed there for three months and was really taken aback by how simple life was. I remember being overwhelmed by the volume of cyclists in the town that we settled in, Shenzhen, and having to quickly learn how to respectfully conduct business, when to speak and not to speak, and how to work with people from a culture that was wholly new to me.

It was one of the very first outsourcing contracts I’d been involved with, and there were no shops, restaurants or facilities close to site. So, every evening we’d be welcomed by the owners of the factory, to sit around a big table and dine on an array of insects, snakes and all kinds of eclectic Chinese food. Their hospitality was amazing.

I went back two years ago, and to see Guangdong as it is now – a thriving economy with mass-skill cities, mass-skill factories and advanced automation and machine learning in business intelligence – is just incredible. Shenzhen’s population has grown to the millions, having transformed from an underdeveloped region to a real powerhouse. This left a huge impression on me, and demonstrated just how rapidly a society can change.

Business is all about the people. It’s about putting people first and understanding their needs and building a rapport. Every nation in the world will command slightly different approaches to business and interaction. However, all are united by a common truth: if you put in the effort of building empathy with people first, successful business will naturally follow.

IoT Now: What has been the proudest moment in your career so far?

I think it was selling the start-up I founded in 2010, a company called Cleartrade Exchange; we achieved a first phase exit to that business just three years in. Everybody that started the company with me was at the point that we sold; it was a true team effort to build that business from start to finish.

When this happened, I took my London team over to meet the Singapore team, and the sense of achievement for us as a young, spirited group, was unforgettable.