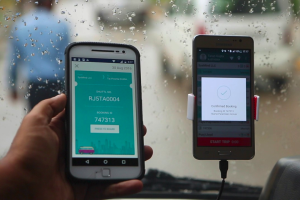 Founded in April 2015, Shuttl is a technology-enabled, seat-based bus mobility solution. It aims to solve unsustainable levels of pollution and congestion in India’s cities by shifting people away from cars and towards buses for their daily commuting needs.

The Shuttl app enables consumers to discover relevant route and stops, choose travel times, purchase monthly and quarterly passes, reserve a seat, navigate to a stop and track the bus for a seamless boarding experience.

With over one million rides served in the first year of operation in Delhi, Shuttl partnered with Chirp to deliver on the core promise of assured seating at scale. Shuttl currently serves over 75,000 rides each day across eight prominent cities in India and has facilitated 20 million rides so far.

Shuttl commits to providing guaranteed seating for every passenger, delivered as part of a seamless travel experience. Boarding only genuine customers therefore becomes mandatory, to not only ensure a guaranteed seat for every passenger, but to also fulfil regulatory requirements. However, Shuttl quickly found that requiring its driver to authenticate every customer manually was both time-consuming and prone to human error.

These challenges affected both parties involved – the drivers and passengers. Customer experience suffered if there were delays or errors in boarding, meanwhile the driver’s role was compromised if they had to complete the tedious process of manually authenticating every customer as they boarded. Not only did the business suffer indirectly from the bad customer and driver experiences, there were also further security and regulatory compliance concerns if the boarding process was not fool-proof and fraudulent users were able to embark on Shuttl services.

Shuttl realised that these issues could only be resolved with technology and began looking for an effective and scalable solution. The company tested several solutions, including near-field communication (NFC), GPS and Wi-Fi, but ultimately found that each posed significant shortcomings. For example, NFC would require all users to have an NFC-enabled handset, meanwhile GPS was too inaccurate for this purpose, and local hotspots were unreliable.

In order to eradicate these concerns and provide a fast customer journey, the company required a solution which both accounted for human error during boarding pass authentication and supported the wide array of devices that customers carry – for example, those that do not support NFC. Operating primarily across urban areas, Shuttl also needed a robust solution to mitigate against any noise and worked completely offline during a loss of 3G/4G coverage along the journey, which could prevent customers from being able to board in locations where connectivity is unreliable.

Chirp aims to simplify connectivity using sound. Its machine-to-machine communications software enables any device with a loudspeaker or microphone to exchange data via inaudible sound waves. Developed by unparalleled research and a world-class engineering team, Chirp enables the interconnection of millions of devices in a seamless, scalable, and cost-effective way to enhance end-user experience and add value to existing hardware.

Shuttl’s ambition was to fully automate the customer boarding and pass authentication process to enable passengers to board more quickly whilst the driver focuses on driving. During its search, Shuttl explored Chirp’s data-over-sound technology as a way to enable frictionless and secure boarding pass provisioning with minimal time delays.

After testing, the company identified Chirp’s technology as one that is able to provide the data exchange required capabilities to facilitate a fast and reliable customer boarding experience while catering to a range of consumer devices. In 2016, Shuttl fully integrated its data-over-sound SDK for iOS and Android into both its consumer and driver applications.

To successfully authenticate every passenger’s boarding pass, Shuttl’s consumer app uses Chirp to create a dynamically generated token. Using sound waves, the Chirp is then transmitted from the consumer’s device and received by the driver via the Android SDK implemented in their terminals and automatically checked for authenticity. Upon approval, both driver and user are notified in a matter of seconds, to allow customers to seamlessly check in and substantially reduce boarding time versus other methods.

Since implementing Chirp’s data-over-sound solution, Shuttl has been able to significantly lower its previous customer boarding and authentication issues such as time delays and manual human error. Shuttl has experienced an increase in the reliability of their service as a result, which can be used successfully by anyone who owns a smartphone.

By integrating Chirp’s SDKs into its customer and driver applications, Shuttl has been able to deliver a better consumer experience with frictionless passenger boarding, which is ultimately reflected in a reduced boarding and journey time.

Through enhanced customer journeys, Shuttl has also witnessed a rise in the use of its services across India. Today, Chirp is now used to authenticate more than 75,000 Shuttl rides every day, helping the company to scale its services and provide both customers and drivers with a simple and effortless onboarding experience.

Previously a hindrance, boarding is now one of the smoothest user touchpoints for Shuttl. Chirp’s data-over-sound solution has enabled the company to eradicate concerns over poor connectivity and loud city environments in urban areas – a notable fleet given the scale at which it is being used.

“Shuttl offers assured seat to the consumers and has a high-frequency consumer engagement – twice daily. It is imperative that consumer boarding must be accurate, fast and seamless for Shuttl to be able to scale. Chirp has delivered very well on each of these promises.”

“The ideal Shuttl boarding experience is when the customer simply arrives and boards, with everything else completely quietly in the background. Chirp’s authentication is not invisible, but it is as close as it can get to that. The interface is also minimal and it works wonderfully.” – Vishwas Singh, VP, Advocacy, Shuttl