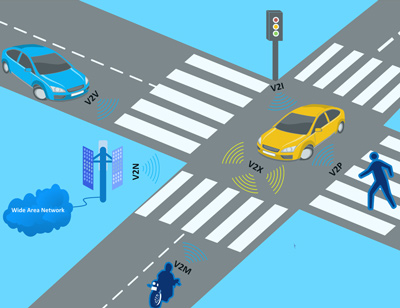 Commonly referred to as V2X, vehicle-to-everything communications technology allows vehicles to directly communicate with each other, roadside infrastructure, and other road users to deliver an array of benefits in the form of road safety, traffic efficiency, smart mobility, environmental sustainability, and driver convenience. In addition, V2X is also helping pave the way for fully autonomous driving through its unique non line-of-sight sensing capability which allows vehicles to detect potential hazards, traffic, and road conditions from longer distances and sooner than other in-vehicle sensors such as cameras, radar, and LiDAR (Light Detection and Ranging).

With an initial focus on road safety and traffic efficiency applications, Toyota and GM (General Motors) have already equipped some of their vehicle models with IEEE 802.11p-based V2X technology in Japan and North America.  However, momentum has lately swung in favor of C-V2X with a number of demonstrations and field trials – supported by the cellular industry as well as a growing number of automakers including Ford, SAIC, Geely, Daimler, BMW, Audi and Jaguar Land Rover. In fact, even early adopters of 802.11p − most notably GM (General Motors) − have expressed willingness to invest in C-V2X technology. Nonetheless, staunch DSRC proponents are pushing ahead with their plans to roll out 802.11p.

In terms of other publicly announced commercial commitments, Volkswagen plans to deploy IEEE 802.11p on volume models in Europe starting from early 2020, while Geely and Ford plan to integrate C-V2X in their new vehicles by 2021 and 2022 respectively.

It is also worth nothing that a number of luxury automakers – including BMW, Daimler, Volkswagen’s subsidiary Audi, and Volvo Cars – already deliver certain V2X-type applications through wide-area cellular connectivity and supporting infrastructure such as appropriately equipped roadwork trailers.

Despite the ongoing 802.11p/DSRC versus C-V2X debate, regulatory uncertainty and other challenges, global spending on V2X communications technology is expected to grow at a CAGR of more than 170% between 2019 and 2022. SNS Telecom & IT predicts that by the end of 2022,  V2X will account for a market worth $1.2 Billion.

However, this figure will appear relatively modest when looking at the practical benefits of V2X communications technology – which would translate to saving millions of lives and billions of dollars in damages each year worldwide. Based on findings from early commercial rollouts, large-scale pilots, and research projects, SNS Telecom & IT estimates that V2X can potentially eliminate up to 80% of road accidents; ease traffic congestion by as much as 20%; slash journey times by half; reduce fuel consumption and emissions by 10-40%; and significantly enhance sensing capabilities for autonomous driving. 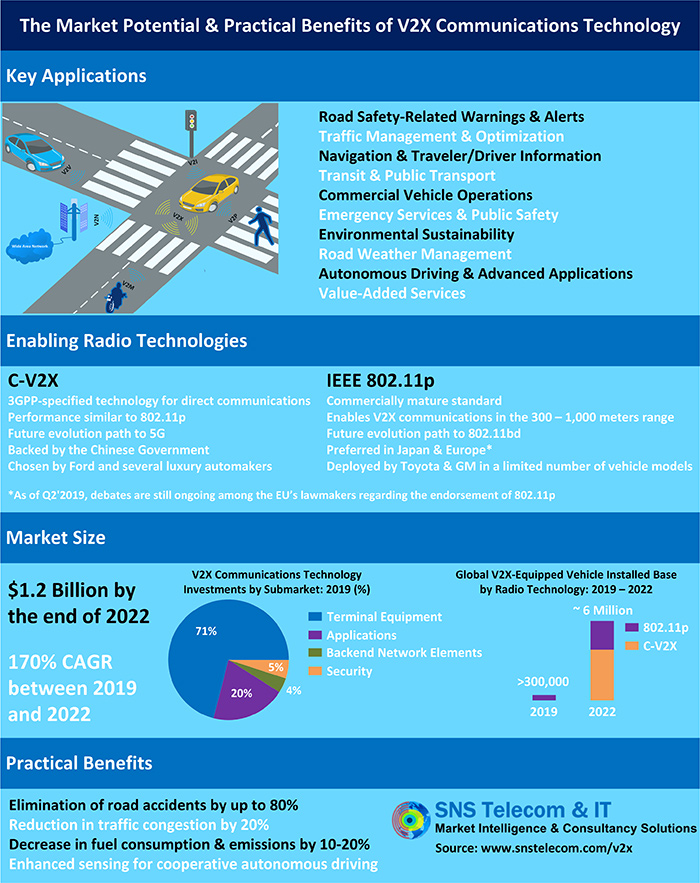