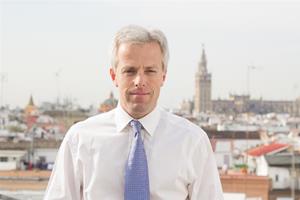 Charles Towers-Clark: I didn’t have any idea. I thought of being various things, including an army officer (failed the hearing test), a furniture maker (not enough patience), and a social worker (not enough maturity to detach from other people’s issues). In the end, it wasn’t until I was running a company that I found what I enjoyed: leading people.

This enjoyment lasted until two years ago when I realised that I didn’t want to manage people, but instead let them lead themselves. People (including managers) are much happier and more productive when they aren’t being told what their working day looks like. So, it actually took me almost 50 years to find my passion, which I’m sure is a lot longer than most children.

Charles T-C: Perhaps the most important business advice I could share with my younger self would be: don’t try and do everything yourself. Equally, you don’t have to have a partner to start a business. The right employees will get you far further than you could have dreamed – your job is to build the company culture, not do everything. However, make sure you spend a lot of time interviewing and getting to know people you will work with, and then trust them to do their job – and let them own their work.

Charles T-C: Me… Flippancy aside, I’ve had a few bosses over the years and none have been especially bad. I’m always in admiration of those who have to satisfy a boss’s whims and also meet the needs of a company (which often do not align). However, as I am the worst boss I’ve had to experience, here are some examples of my own ‘bad boss’ moments.

Charles T-C: One of our clients, Arnia, monitors beehives to ascertain the health of the bee colony. They use temperature, vibration and pressure sensors in each hive, which provides measurements on their platform for a number of metrics. These include the Queen’s laying status, colony strength, nectar flow and whether the hive has been moved or stolen.

There’s a quote often attributed to Einstein that I find disturbing and compelling in equal measure: “If the bee disappeared off the face of the Earth, man would only have four years left to live.” In the face of colony collapse disorder (CCD) that became a real cause for concern a decade ago, this argument has certainly picked up steam in the last few years, and I find it fascinating that the IoT can help to alleviate such a drastic problem purely by offering us more insight into phenomena such as this.

Charles T-C: I used to live and work in Russia and Central Asia, which was by far my most memorable business experience overseas. Business travel is one thing but working and living in another place is another thing entirely.

I love working in other cultures, purely because of the challenges of navigating life in another country and the reward of overcoming these challenges. Especially in a region so different from my own, there is a high potential for mix-ups and mistakes in translation, but there is also a huge amount of divergent thinking that is ripe for the taking. This is why setting up shop in a foreign country will always be a positive experience – the ideas, insights and the strength of character you gain vastly outweigh the challenges faced.

IoT Now: What lessons have you learned from doing business in other countries or organisation?

Charles T-C: We are all the same.  Everyone wants to be treated well and we want opportunities to improve. However, I’ve also learned that working in overly bureaucratic countries is depressing and frustrating. I recently watched the mini-series ‘Chernobyl’, and it reminded me of dealing with the communist system. The accident was caused as a result of the belief that the state always knows best – this is dangerous and demoralising, and I have always sought to avoid this ‘top-down’ mentality.

When we moved to a system of self-management two years ago – we call it WEIRD (Wisdom, Emotional intelligence, Initiative, Responsibility, and Development) – my experience of Soviet bureaucracy informed many of my decisions. We currently have offices across the world (in Cambridge, Seville, San Francisco, Nicaragua, Mexico and Hong Kong) and a system where the CEO had to approve every decision would never work for our global strategy.

Now, each office is autonomous and makes its own decisions depending on the local market and available expertise – I have my past experiences of trying to navigate complicated, centralised bureaucracies to thank for the success of our current model.

(Also see the video: Quickfire Interview with the author of ‘The WEIRD CEO’, Charles Towers-Clark.)