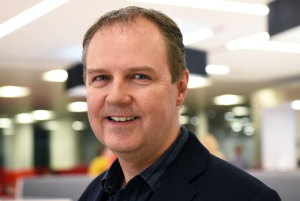 Career openings in computer software were non-existent when Gary Waite, head of eSIM Strategy at Sim Local, started job hunting. He’s since travelled the world and learned to get to know people’s objective then find a way to work together.

Gary Waite: Well, career advice at my secondary school in Fife, Scotland was pretty stark: What job will you do at the local dockyard? And there were only four choices: Joiner, Electrician, Carpenter or Welder!

I wasn’t particularly enamoured with those options so I decided in 1981, aged 16, after a chance reading of a section at the back of my maths book on a new thing called “Computers and Programming”, that this was my future.

Unfortunately, software courses at university didn’t exist then, so I took the closest thing I could – Electrical and Electronic Engineering. After that, I was lucky with my first job – junior software engineer at a start-up company developing semiconductor burn-in/test systems. It wasn’t too many years later, in 1992, that I started writing software for a new thing called a “SIM card”. A world from which I have never seemed to escape ever since…

Gary Waite: There are so many lessons I would have loved to pass on to my younger self, but perhaps the biggest lesson would be; your integrity is everything, so protect it at all costs. It takes years to build and can be lost in a moment if you make the wrong decisions. And, when faced with big decisions, always sleep on them.

Perhaps other advice I would have given to myself is: buy as much Tesla, Amazon and Apple stock as you can!

Gary Waite: Overall, he was a good boss and I learned a hell of a lot from him about business – especially how to treat customers extremely well – but he constantly pushed us far too hard when he didn’t actually need to. All this caused a lot of unnecessary stress across the team, with literally no improvement in productivity. All things considered, if he was the worst boss I had, then I’ve been very lucky with bosses.

Gary Waite: I’ve always been a huge fan of IoT and I got into it at a very early stage when I was at O2 in the UK, at the start of the millennium. I could see then that any electronic device, if connected, would have much greater value, but the presence of a removable SIM card was going to be a problem for all sorts of reasons.

So, I started working on what was to become eSIM. Many years later, after I delivered the GSMA technical standard for eSIM, I made the move to Sim Local. I can’t currently talk about the use cases we’re planning in IoT, but if you look closely at what we’re doing in consumer, you might be able to work out some of them. It’s going to be an exciting world!

Gary Waite: First, I just love travel generally. Many people get fed up of it, and it’s true – in some cases airports can be a real headache – but I love experiencing new places, and I believe everyone should have the opportunity to do the same. It’s another reason why I enjoy working at Sim Local – we’re all over the travel sector, using technology wherever we can to make life easier for people.

My most memorable business trip was when I was 25 and was asked to go China for a month to promote the Italian company I worked for at the time. The trip was set up by the Chinese and Italian governments for the CEO but he became ill, and as it came down the management chain, for whatever reason, nobody was able to commit themselves for that length of time. Finally, when the opportunity was presented to myself and a hardware engineer colleague, we both said “Too right!” after thinking about it for two nanoseconds.

It was an incredible adventure! We travelled all over China, met with many business leaders and government officials, toured around numerous huge factories and I signed many business deals on behalf of my company. Outside of all the business engagements, we saw all the major sights, ate the very best food and drank a fair bit. It was probably that trip that showed me that we’re all able to do anything – we just need to be confident and then accept the opportunities that come our way (or be able to list a million reasons why not).

Gary Waite: At Sim Local, we’re lucky enough to deal with business partners across the globe, working with affiliate networks across 54 countries. Similar to travel itself, when doing business generally, I think it comes down to the fact that we’re all just people who want to get from A to B in our objectives.

So, when dealing with anyone you meet, get to know them and find out what their ‘B’ is. Then, find a way that allows you both to work together to get to where you both want to be – there’s usually a way – so look hard and be inventive. People first, and the business will usually follow.