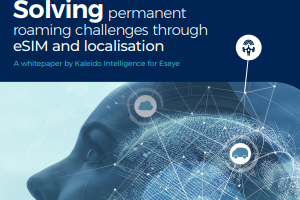 Global IoT projects will fail to reach their potential unless the problems of global permanent roaming are resolved, according to a new research report published by telecommunications analyst firm, Kaleido Intelligence, commissioned by global IoT connectivity provider Eseye.

The ‘Solving Permanent Roaming Challenges Through eSIM and Localisation’ report analyses why global IoT rollouts have failed to meet expectations, the challenges of permanent roaming and future regulatory concerns, and why advanced eSIM and localisation is a long-term, flexible solution to meet industry requirements.

Despite global cellular IoT connections standing at 1.7 billion, the limiting factor influencing future growth now lies in guaranteeing connectivity for commercial IoT devices, regardless of where they are deployed. This is especially crucial in applications such as telehealth or telecare, where personal health depends on reliable connectivity. Without guaranteed in-country connectivity, business cases become untenable, projects cannot scale and there is an unacceptable level of risk.

Permanent roaming is not viable for long-term commercial IoT deployments

Roaming is the historical solution for connecting consumer cellular devices outside of their domestic market. When an IoT device is connected to a network outside its home country for more than 90 days, it is deemed to be permanently roaming and risks being disconnected from the network. Theimplicationsfor enterprise IoT deployments include:

Nick Earle, CEO, Eseye comments, “Negative attitudes towards permanent roaming from the perception that the volume of connections may cause network capacity and performance issues to regulators objecting to cross-border data transit mean operators are unable or unwilling to guarantee the global connectivity required for successful large-scale projects.”

“A more flexible solution is needed to de-risk global IoT projects and reduce uncertainty in the pre-deployment phase by ensuring devices can connect to the best provider, wherever they are located.”

Steffen Sorrell, chief of research, Kaleido Intelligence adds, “Kaleido Intelligence has found that while the installed base of eSIM-enabled IoT devices reached over 300 million in 2020, less than 20% of those devices were actively using the eSIM to connect to data services. Thus, it is clear that the current state of eSIM has not made a considerable dent in reducing IoT roaming or delivering the benefits of eSIM localisation for international IoT deployments.”

“Furthermore, unless connections produce substantial amounts of data that can make inbound roaming connections financially viable, operators are losing out on significant revenue by not localising those connections, which will also allow enterprises to enjoy near-ubiquitous connectivity in their deployments.”

Eseye has built a global network of localisation agreements with regional operators, unrestricted by existing roaming agreements. Its multi-IMSI eSIM with advanced eUICC profile management is completely agnostic and can store up to 10 bootstrap profiles. These profiles can be easily uploaded over-the-air, enabling seamless switching between MNOs to deliver optimum connection levels for customers.

Guaranteed connectivity allows device owners to circumnavigate permanent roaming restrictions, which is not possible with the majority of available eSIM solutions that rely on a single global SIM and bootstrap option.

These are unable to offer the long-term flexibility to deliver high levels of global connectivity at all times, especially if device circumstances change.

To address this, Eseye offers more comprehensive, reliable connectivity for IoT devices, across a greater number of territories, than any other provider can deliver, eliminating the cost and risk of devices being disconnected.

Earle concludes, “Uncertainty about both initial and lifetime device connectivity is a huge concern for businesses rolling out large-scale IoT projects. Global rollouts are not cheap, and the level of investment needed is harder to justify in commercial terms when the connectivity environment is not assured. This situation will continue to stifle the enormous potential of IoT unless an alternative, such as advanced intelligent eSIMs supported by a network localisation capability, is adopted.”

Register for the Kaleido Intelligence and Eseye webinar on 17 June