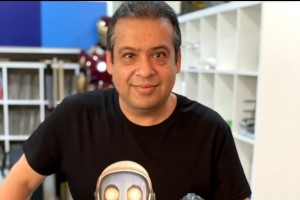 Jawad Ashraf, CTO and co-founder of Terra Virtua, has been a techie ever since playing with his ZX81. These days it’s a passion that drives his business. Here he shares some Life Lessons in choosing a business partner and aligning your goals with foreign partners to achieve what you both want.

Jawad Ashraf: I’ve been fascinated by computers from the age of 14, ever since my parents bought me a ZX81 home computer. It was hooked up to my black and white monitor, where I would buy magazines and type in the codes within them to play games. It was just pen and paper before that, so this computer was the beginning, and it was fascinating so much so that my parents couldn’t drag me away from it! I’ve always been interested in the future and anything Sci-Fi, especially shows like Doctor Who, so I knew I wanted to do something with tech when I grew up.

Jawad Ashraf: The number one lesson is to be very careful who you choose as your business partner because, after your significant other, it’s the most important relationship you’ll have. You need to make sure you can work together effectively and be a success in the long-term , so really think about it!

Aside from that, try and spend as much time nurturing your team as you do for your business. It’s vital your team is as bought into the business vision as you are. When I was younger I would have just been happy with pushing ahead with the company’s vision, but now I focus a lot of time getting everyone invested in it.

Jawad Ashraf: I’m lucky to say I’ve never really had a bad boss. The biggest learning from one of my bosses was to systematically avoid measuring the performance of every individual. It forced people to become accountable for themselves and it took away from ensuring everyone and the team succeeded. Working this way damaged team spirit. You need to have everyone and the business culture pulling in the right direction to be successful.

Jawad Ashraf: Through our work with Terra Virtua, we’re always looking to the future. The exciting developments around IoT are set to flourish with mixed reality, augmented and virtual reality. Linking the three up with IoT devices can create that immersive and physical experience that will deliver a new sweet spot in the entertainment sector.

Jawad Ashraf: A memorable one was one of the first trips I took with my co-founder, Gary Bracey, when we had just started the business. We were busy fundraising and hopping from America to China to South Korea. It was thrilling going from country to country to try and secure capital to help the business grow, but with the time zones involved and the amount of travel it was an exhausting trip. The most memorable part though was our plane hopping meant Gary, who’s a big football fan, had to miss the World Cup Final. Luckily though the pilot was able to get the score from the ground mid-flight, so at least he knew what happened!

Jawad Ashraf: It’s important when dealing with other countries to understand what drives them. Often though it is cultural, rather than geographical differences that businesses must tap into. You must align your goals with theirs to get the best out of them. If you go in with your agenda and try and force others to conform, it’s not going to get you what you want. Understanding the different cultures and needs of the people you work with is the best recipe for success.