Home › Blogs › Augmented and virtual reality in Boston, and autonomous things in Vienna 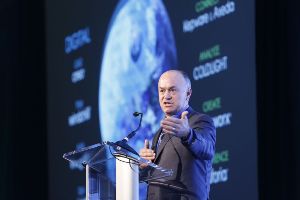 THE WEEK: Homeward bound from a User Group conference unlike any I’ve attended before, says Jeremy Cowan. This time it was PTC‘s annual thrash in sunny Boston, Massachussetts, for 4,000 of their closest friends.

Best known over the last 30 odd years for its 2D and 3D computer-aided design support for industry, PTC has diversified aggressively under its president and CEO, Jim Heppelmann, an energetic and thoughtful executive who joined when PTC acquired Windchill Technology that he co-founded. More recently his goal has been “to create, connect, analyse, operate, and service the products and systems that comprise the Internet of Things.”

In the six years since his appointment as CEO PTC has acquired a series of companies with expertise in machine-to-machine (M2M) communications and the Internet of Things. Companies like ThingWorx and Axeda were snapped up in 2014 for their platforms and developer solutions respectively, while in 2015 the company added ColdLight for its predictive analytics skills and Vuforia’s augmented reality expertise.

Before some people could even see the IoT’s potential, PTC was gathering the teams to support their customers’ customers as they connect their machines and shift from product-based to service-based business models. (Also see: PTC follows ThingWorx deal with US$170m acquisition of Axeda to expand its IoT technology portfolio.)

Acquiring this Augmented Reality and Virtual Reality (AR & VR) technology is the clearest indication of PTC’s latest bet on the next big thing in IoT. And, having seen client and partner Caterpillar‘s demo of AR support for skilled and semi-skilled end users running sophisticated portable generator sets it would be a brave person that bets against them. (Also see: Caterpillar shows how PTC’s augmented and virtual reality technology plus IoT can benefit industry.) A long haul flight on a low cost airline soon showed where Norwegian has saved a few quid. Now, I’m a lover of the low cost model (leaving aside Ryanair‘s apparent disdain for its customers), and became an instant fan of Norwegian a few years ago on a flight to Stockholm when I discovered its on board Wi-Fi.

However, when an airline provides an app for check-in that doesn’t apply to many of its customers in the region – anyone flying transatlantic — I get a little peeved. When the app is supported by a website of maze-like circularity that you keep recognising where you first came in, I feel my life ebbing away. When I finally give in and call a contact centre agent who asks me triumphantly, “Didn’t you know you can’t check in online from London to Boston?”, well that’s when I start my own private No Fly List. Shame really, the flight was comfortable.

A short weekend followed by a flying visit to glorious Vienna for the 4th M2M/IoT CEE Forum. Opening this rapidly growing event on Monday to discuss IoT in Central & Eastern Europe I was struck again (I was also lucky enough to moderate it last year) by the range of countries represented – more than 20 nationalities among 475 delegates and sponsors.

It’s encouraging to see IoT reaching such a wide audience. It’s also a stark reminder for Europeans of the challenges to outsiders of deploying, for example, container tracking in 28 EU countries (well, 28 at time of writing – the UK’s EU Exit referendum is on June 23) compared to North America. A market of 400 million it may be, but how many languages are there, how many tax regimes, how many communications and transport regulations to satisfy? I’ll leave that there, as this isn’t the place to get into the UK’s political debate about the EU membership.

The themes emerging from the CEE Forum were not so different from other recent IoT conferences. High on the agenda were data analytics at the edge and in the cloud, security, developing ecosystems to control autonomous things and managing privacy as you do so. But the fact that the organisers were able to fill the spectacular City Hall venue with more than 450 people (up from 250 last year) says there is a thirst for IoT information and connections.