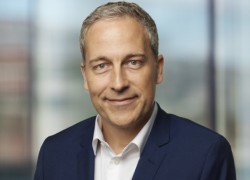 Ericsson forecasts there will be 1 billion 5G subscriptions for enhanced mobile broadband by 2023. This prediction is among the key statistics presented in the November edition of the Ericsson Mobility Report released. Expected to be deployed first in dense urban areas, 5G will cover over 20% of the world’s population by the end of 2023.

The first commercial networks based on 5G New Radio (NR) are expected to go live in 2019, with major deployments from 2020. Early 5G deployments are foreseen in several markets, including the US, South Korea, Japan and China.

Mobile data traffic is expected to surge by eight times during the forecast period, reaching 110 Exabytes per month by 2023. This corresponds to 5.5 million years of HD video streaming.

All regions maintain mobile data traffic growth, with North America showing the highest average usage per smartphone, exceeding 7GB per month by the end of 2017. 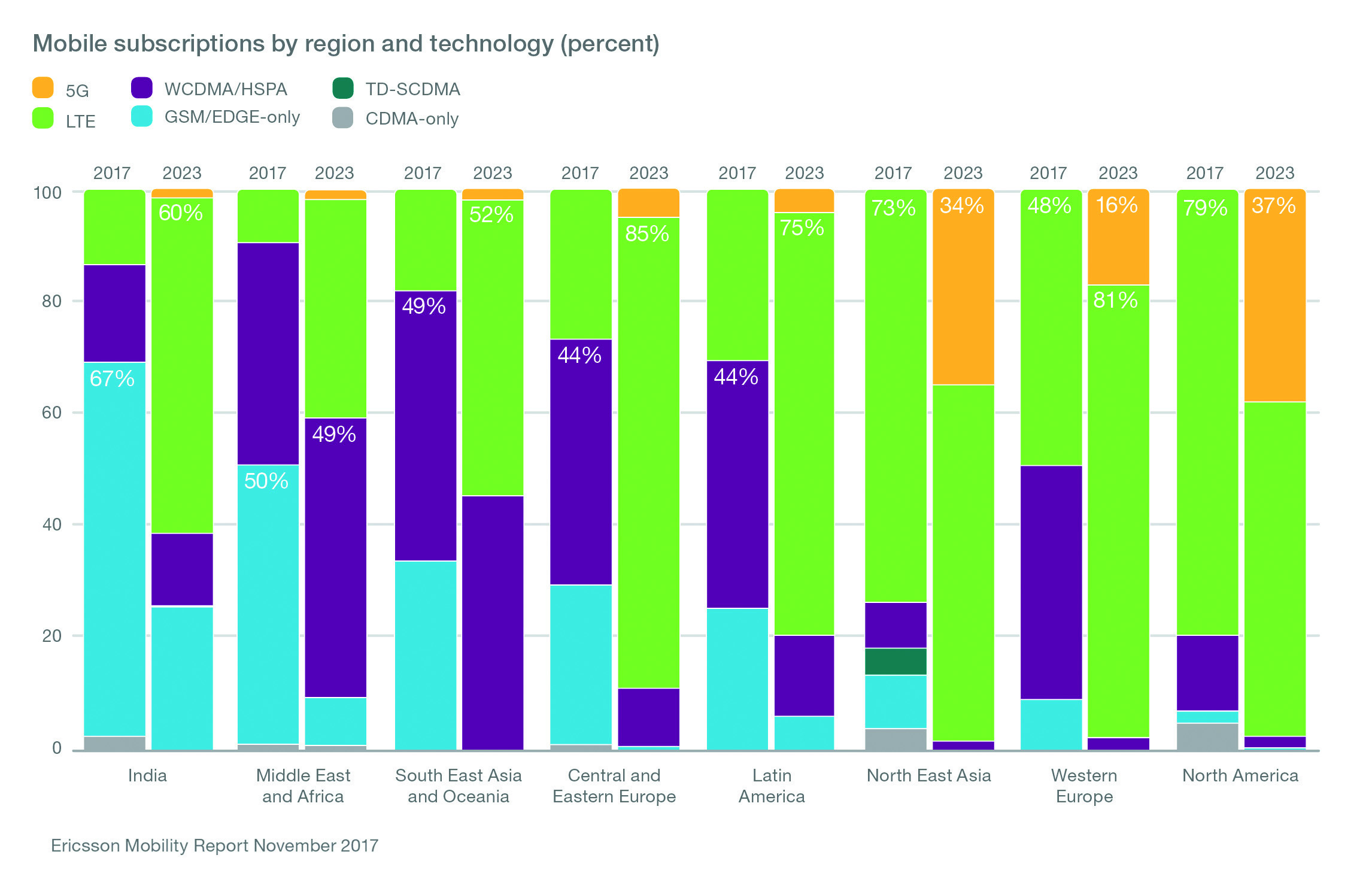 Video consumption continues to fuel mobile broadband traffic growth. The driving force behind video’s uptrend are the young millennials – those in the 15 to 24 age bracket – who stream 2.5X more than those over 45 years of age.

Streaming video in higher resolutions and an emerging trend of increased streaming of immersive video formats, such as 360-degree video, will have an impact on data traffic consumption volumes. For example, a YouTube 360-degree video uses 4 to 5 times as much bandwidth as a normal YouTube video of the same perceived quality.

By the end of this year, LTE will be the dominant mobile access technology. It is estimated to reach 5.5 billion subscriptions and cover more than 85% of the world’s population by the end of 2023.

Voice over LTE (VoLTE) has been launched in more than 125 networks in over 60 countries across all regions. VoLTE subscriptions are projected to reach 5.5 billion by the end of 2023, accounting for more than 80% of the combined LTE and 5G subscriptions.

Smartwatches are one of the latest devices to use VoLTE. Users are able to make voice calls directly on their smartwatch, without having a smartphone nearby (multi-SIM). Calls can also be transferred between a user’s smartphone and watch. 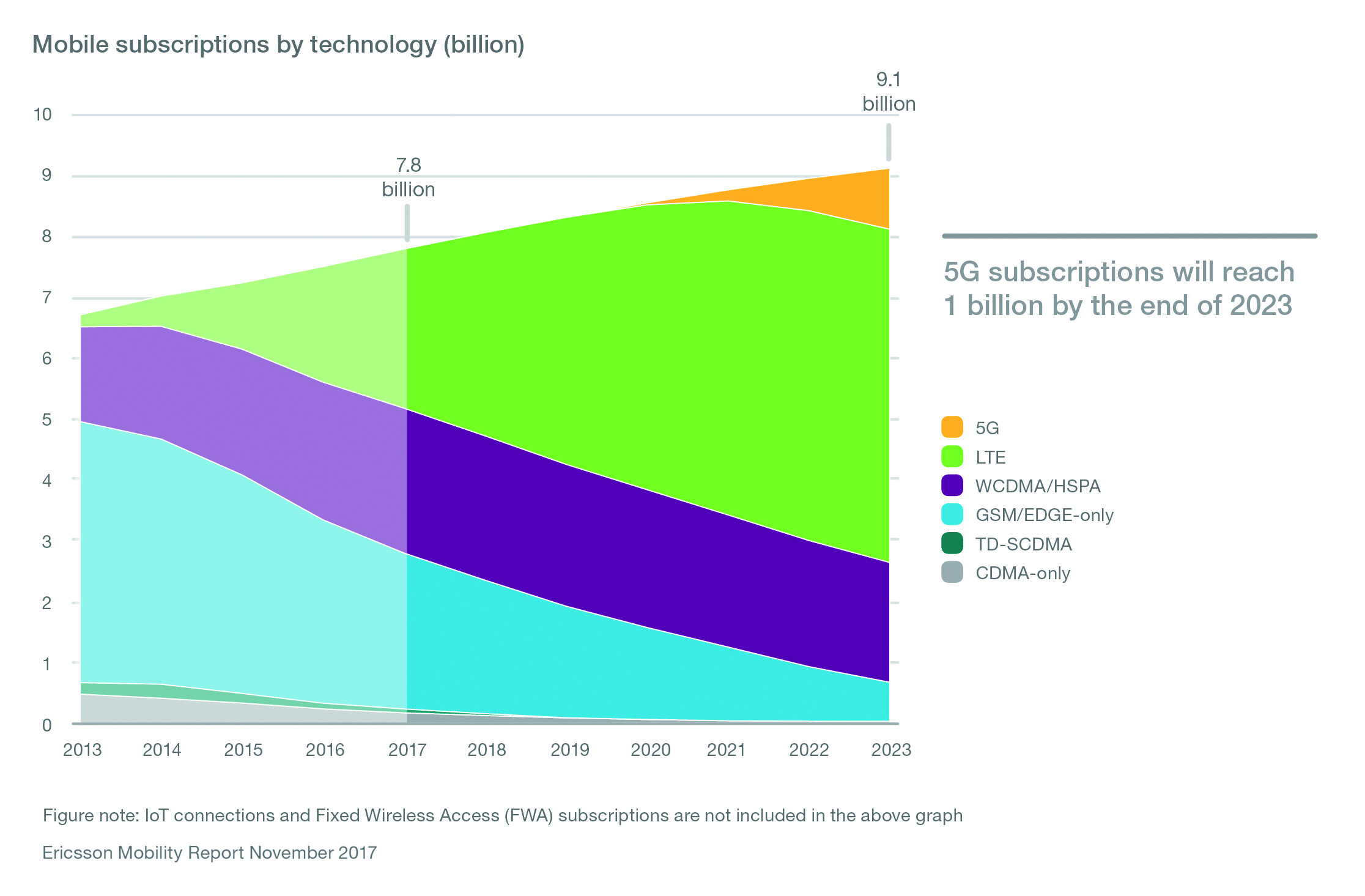 In addition, the report examines the emergence of new use cases as network capabilities evolve – smartwatches, IoT alarms, and augmented reality-assisted maintenance and repair, to name a few. As we prepare for 5G, these trends will continue to set the agenda for the mobile industry going forward.”

Regional reports for Western Europe, Central and Eastern Europe, Middle East and Africa, and Latin America have also been published along with the Global Ericsson Mobility Report. Register for our webinar, today November 28, to get the details. See the full report.